The Next Generation Annual No. 6

8854.3, 48015.1
Future Imperiled was the conclusion of the two-part Convergence story arc, a crossover between The Original Series and The Next Generation involving Gary Seven. The second half of the story was printed in DC Comics' sixth and final TNG Annual released in February 1996.

First officer's log, stardate 48015.1. Our initial response to Commander Data's abduction was to blame the Romulans, of course. After all, we were on the fringe of the Neutral Zone. The Romulans were the logical suspects. However, we've turned up evidence that tells us the Romulans weren't involved at all. In fact–

Captain's log ... We continue to purse the trail left by Commander Data's abductors. Fortunately, we were able to discern the residual presence of triolic waves in the spot Data was taken from. That is how we know the Devidians are responsible for his disappearance. The fact that the triolic wave emissions lead straight to their home system is only the icing on the cake. Of course, we have encountered the Devidians before. And where they are involved, one cannot help but wonder... was Data transported through time as well as space? Actually, that possibility seems increasingly likely in light of...

As I was saying, Data's transport through time as well as space seems increasingly likely in light of Guinan's observations. After all, she seems to have a sense about the timestream and she has informed me that someone is tampering with it, creating subtle alterations. That someone would appear to be the Devidans. If this is so, Data's abduction may only be the tip of the iceberg.

In the meantime, I find myself wondering in what ways the time stream may have changed. Is there – difficult as it is to imagine – some sort of peace between the Federation and the Romulans? Is the Federation safer from Romulan aggression in the unaltered course of events? And what of myself? Am I still a captain in that other frame of reference? A husband? A father perhaps? Someone's lover?

Geordi LaForge tracked the emissions to a cavern on Devidia IV. Leaving Commander Eram in charge, Jean-Luc Picard beamed down with LaForge, William T. Riker, Beverly Crusher, Worf and Deanna Troi. LaForge connected a subspace generator to a phase discriminator to send them where Data had been taken. It worked, taking them to the barren planet where Data was being held.

In 2291, the USS Enterprise-A also arrived at Devidia IV. Supervisor Exana joined Captain James T. Kirk, Leonard McCoy, Montgomery Scott, Pavel Chekov and Nyota Uhura as they beamed down into the same cavern. Using a device that created chronitons, Exana took advantage of the cavern's energy-focusing properties and formed a portal to the barren planet.

While out of phase with each other, the two Starfleet groups could see each other blurrily. Kirk's group was first to locate the force field containing Data, Spock, Romulan General Tellius, John Harriman and new arrival Chancellor Gowron, but both Starfleet rescue parties were suddenly assaulted by dozens of Devidians. During the firefight, Scott, Uhura, Chekov and Troi were shot, but the Devidians retreated. Spock could see Picard on the other side of the force field and warned him not to fire at it, as that would cause the field to implode and kill all five prisoners. It had to be fired at from inside. Exana beamed her weapon inside the force field, and Data used it to collapse the field.

Exana became fully visible to the Enterprise-D away team. Using her equipment, she intended to erase memories before people were returned, to protect the timeline. Before she began, however, five of the Aegis appeared, confessing that Exana was right and that they would more closely monitor the Devidians in the future. The Aegis altered history so Gary Seven was able to survive the Devidian's attack in 2291.

(James T. Kirk's) Captain's log, stardate 8854.3. Or something approximating it, anyway. On the other hand, it seems even the Aegis aren't so high and mighty they can't learn a few things from mere mortals. 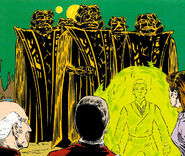