For other uses, see Gauntlet.

Gauntlet is the first book in the Star Trek: Stargazer series by Michael Jan Friedman. It is preceded by TNG novel The Valiant, the first story set in Friedman's Stargazer era. It is followed by book two in the series, Progenitor.

Now thrust into his first command position following the events of The Valiant, Captain Jean-Luc Picard is faced with his first mission as captain of the USS Stargazer. Turning out to only be a scheme by spiteful Starfleet Admiral Arlen McAteer to make Picard look bad, he and his inexperienced crew must chase interstellar criminal the White Wolf in the crook's hiding place; the mysterious lazarus star system Beta Barritus. Faced with the impossible mission, he must overcome the challenges and prove himself as a Starfleet Captain.

Though newly minted as captain, Picard faces opposition from his fellow captains and his sector commander, Admiral Arlen McAteer, all of whom consider him too young and inexperienced. McAteer—who wishes to discredit and relieve both Picard and his mentor (and McAteer’s rival) Admiral Medhi—assigns several new crewmembers to the Stargazer without Picard’s approval and orders the ship on an impossible mission: to apprehend the notorious pirate known as the White Wolf. The bandit, who has eluded all other pursuers, has been raiding Federation cargo ships and his most recent booty is a shipment of vitally needed medical research materials. The captain’s old friend Cortin Zweller warns Picard about McAteer’s vendetta.

Picard’s new crewmembers include second officer Elizabeth Wu, who butts heads with many crewmembers while attempting to hold them to a strict interpretation of all regulations, no matter how minor. Chief science officer Juanita Valderrama is comfortable falling far short of her potential, and takes credit for other people’s ideas when pushed to succeed. Obal is a Binderian (he looks like a small plucked chicken) assigned to security, and though some of the first impressions he makes on his crew are less than promising, he ultimately saves several lives and proves to be a valuable addition. Ensign Andreas Nikolas is a self-styled lothario with a history of disciplinary problems. Ensign Joe Caber is the impressive and personable son of an admiral, though he displays increasingly racist and insubordinate feelings towards Obal. Ensign Jiterica is a Nizhrak envoy, a sentient plasma cloud who must live within a specially designed yet cumbersome EV suit and who has great difficulty fitting in with her humanoid crewmates. Ensign Dikembe Ulelo joins the communications staff, though he seems to have ulterior motives and his own secret mission.

The Stargazer tracks the White Wolf to his favored hiding place, Beta Barritus—the pulverized remains of a post-nova star system whose star has reignited. The crew develops some innovative approaches and sensor enhancements that allow them to slip deep into the system, where they find and, after a brief battle, disable the White Wolf’s ship. They are also engaged by Captain Denton Greenbriar of the USS Cochise, though the Stargazer is able to incapacitate their sister ship as well. It is revealed that the pirate is actually a well-meaning exobiologist. He had discovered a planet rich in latinum, but found that any effort to mine the valuable mineral would destroy the planet’s delicate ecosystem and annihilate its pre-sentient species. The “pirate” has been raiding local shipping lanes in order to keep Starfleet patrols active in the region, thus keeping out any unscrupulous parties. Greenbriar had once captured the White Wolf himself, but released him and became his ally when he learned the truth. Picard agrees to do the same, after recovering the valuable medical shipment.

Gerda Asmund and Dr. Greyhorse spar with each other before beginning a more intimate secret relationship. Vigo becomes obsessed with the game sharash’di. Caber’s racism ultimately gets the better of him and he attacks Obal, then Nikolas when the other ensign comes to the Binderian’s aid, but Obal takes him down. Valderrama and Caber are relived. Wu is convinced to relax her policies on minor regulations. 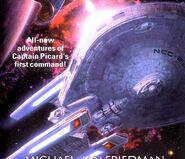 Stargazer.
Add a photo to this gallery

Retrieved from "https://memory-beta.fandom.com/wiki/Gauntlet?oldid=668939"
Community content is available under CC-BY-SA unless otherwise noted.