Gemworld, Book Two of Two is a Star Trek: The Next Generation novel by John Vornholt in the Gemworld duology, and the 59th book in the Pocket Books series of numbered TNG novels. This book was released in 2000.

Sparkling like a three-dimensional snowflake in the depths of space, Gemworld once was one of the Federation's greatest marvels. Six different alien races coexisted peacefully on an artificial world composed entirely of crystal—until the very substance of Gemworld began to multiply out of control, tearing the world apart. Now the entire planet—and the Starship Enterprise as well—faces total destruction.

The only way to stop the disaster is to turn off the vast network of force fields holding Gemworld's atmosphere in place, but to do so will require the cooperation of each of the planet's half dozen alien civilizations, one of which sabotaged Gemworld in the first place. With time running out, Captain Picard and his crew, including a lovestruck Lieutenant Barclay, must embark on a hazardous trek across the dying planet to find and unite the chief engineers from many strange and exotic races—while watching out for a mass murderer determined to destroy a world!

Artwork for the book's cover was provided by artist Steven James. The original artwork was altered for publication for editorial reasons, removing a veiled female character, and detailing Picard's combadge. 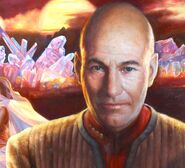 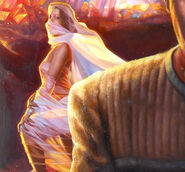