"Genesis" was the 171st episode of Star Trek: The Next Generation, the 19th episode of the show's seventh and final season, first aired during the week of 21 March 1994. The episode was written by Brannon Braga and directed by Gates McFadden.

Dr. Crusher prepares a synthetic T-cell for Barclay, the Enterprise's resident hypochondriac, who has come down with a flu for which he has no immunity. Meanwhile, Data gets ready for the impending birth of Spot's kittens, and Nurse Ogawa announces that she is about to become a mother herself. Worf uses the time to test the ship's weapon upgrades, and is upset when one of his torpedoes veers off course. This affords a slightly bored Picard an opportunity to retrieve the missile, and he takes Data with him. Soon after the pair leaves, Worf begins to act increasingly irritable, demonstrating signs of primordial behavior.

Other members of the crew soon begin to exhibit strange symptoms. Barclay becomes more energetic, Troi feels cold, and Riker loses his ability to think. The dramatic changes also continue in Worf, who tracks Troi to her bathtub and tries to force himself on her. When she refuses, he bites her cheek, and they both wind up in Sickbay. There, Worf becomes completely unresponsive until Beverly discovers a venom pouch in his neck. He sprays Beverly with the acidic poison, then disappears into the bowels of the vessel. It is soon discovered that he has been doing this all over the ship. Continuing to investigate, the staff learns that incidents of behavioral changes are occurring all over the Enterprise. However, when Riker tries to alert Starfleet, he is unable to concentrate enough to do so.

Returning to the Enterprise, Picard and Data are surprised when they find the ship adrift in space. They are even more shocked when they board to find computers down, systems off-line, and eerie, animal-like sounds permeating the ship. They find Troi in her quarters, in the process of transforming into some sort of amphibian, and Data discovers that her DNA has been altered, causing her cells to mutate. They proceed to the Bridge, where they find Riker, who has changed into a prehistoric man. Data learns that the entire crew is affected and concludes that the Enterprise's population is de-evolving.

Data explains that a synthetic T-cell has infected the crew and activated their introns —dormant genetic codes held over from earlier evolutionary times. He also points out that Picard has been infected, which gives them only a few hours to get the ship functioning and solve the problem. They return to Data's quarters to work, and notice that while Spot has changed into an iguana, her kittens, who were born in Data's absence, are fine. Realizing something in Spot's womb protected her babies, they track down the transformed Nurse Ogawa and find that her embryo is unaffected because of a similar protective substance in her womb. However, as they prepare to access her amniotic fluid to develop a retro-virus, Picard becomes increasingly nervous, a sign of his impending transformation. Then a huge, terrifying creature pounds outside the locked door, and they realize it is Worf.

Deducing that Worf has come to mate with Troi, who has a Klingon bite on her cheek, they determine that the only way to lure away Worf is to duplicate her pheromones. Since Data must continue developing the retro-virus, Picard, who is beginning to transform, must spread the pheromones himself. He gets Worf's attention by spraying them into the corridor, and the giant creature is soon chasing Picard through the ship. Worf soon realizes he has been fooled, then corners the captain. Thinking quickly, Picard Is able to use a power cable to shock Worf, knocking him unconscious. Data completes the retro-virus, and the crew Is restored to normal. Beverly realizes the virus was created when she used the synthetic T-cell to fight Barclay's flu, and names the strange affliction that plagued the crew after her hypochondriac patient. 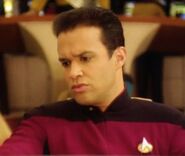