A gormagander is a species of cosmozoan rarely encountered by the Federation, but used as food by the Orions and Klingons.

Gormaganders are known as space whales due to their overall similar shape to the whales of Earth and similar feeding habits. While whales feed on tiny krill in the ocean currents, gormaganders feed on microscopic alpha particles in solar winds. They tend to be very single minded in their feeding, often times forgoing reproduction. These habits have earned gormaganders a place on the Endangered Species List by 2256. (DSC episode: "Magic to Make the Sanest Man Go Mad")

A female gormagander was used as an unwilling living shuttle by Harry Mudd. He used it to escape Klingon captivity and infiltrate the USS Discovery. (DSC episode: "Magic to Make the Sanest Man Go Mad")

Gormagander meat was served on Qo'noS. Sylvia Tilly unknowingly bought a slice from an Orion and ate some before, finding out what it was, she spat it out. (DSC episode: "Will You Take My Hand?")

A gormagander laying aboard the USS Discovery.

Harry Mudd walking out of a gormagander.

A gormagander flying through space

Gormagander meat being cooked by an Orion. 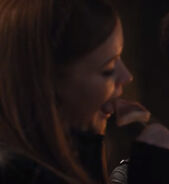 Retrieved from "https://memory-beta.fandom.com/wiki/Gormagander?oldid=669580"
Community content is available under CC-BY-SA unless otherwise noted.