Imperator of the Gorn Hegemony

Imperator of the Gorn Hegemony

It was a monarchy headed by the Gorn Imperator. (ST - Destiny novel: Mere Mortals)

In 2267, the Gorn Hegemony made first contact with the United Federation of Planets, destroying the Federation colony at Cestus III, a world they considered to be their territory before being pursued by the USS Enterprise. After intervention from the non-corporeal lifeforms known as the Metrons, the Gorn Hegemony reached an agreement about the territorial dispute, and Cestus III was ceded to the Federation. (TOS episode: "Arena")

In the 2280s, the Gorn Hegemony was ruled by a king who was old and lacked authority. Actual running of the government was left to the King's advisors and children. Though the government suffered political problems, it was still quite a powerful military force that was more then enough to challenge other governments near their territory. (TOS video game: Klingon Academy)

In 2374, the Gorn Hegemony suffered a coup d'etat by the Black Crest faction as the USS Enterprise-E visited their world in an attempt to enlist the Hegemony's aid in the Dominion War. The new Gorn government attacked and occupied Cestus III, now a Federation Member State, before being thwarted. The Hegemony later joined the Allied cause. (TNG comic: "The Gorn Crisis"; ST novel: Articles of the Federation)

By 2379, the Gorn Hegemony had established normal diplomatic relations with the Federation, and even maintained a diplomatic mission on Earth. The Gorn Ambassador to the United Federation of Planets that year was Zogozin, whom Federation President Min Zife of Bolarus found very intimidating. (TNG novel: A Time to Heal)

In 2381, the Gorn Imperator noted that Ambassador Zogozin may attempt to eat Federation President Nanietta Bacco in retaliation for her "compulsory summit" to shore up support for the Federation's war with the Borg Collective. He eventually conceded and joined the allied cause. (ST - Destiny novel: Mere Mortals)

The leadership of the Gorn state consisted of the Imperator of the Gorn Hegemony. However, in the early 23rd century, (around the time of the TOS episode Arena) it was governed by two Autarchs, one from the capital world of S'sagron and the other from the former colonies of the Gorn Empire which had fragmented from civil war years prior. Below these duel executives was a council that was suppose to be the voice of the Gorn people but in practice, due to the philosophy of Gressigssgir the faction with the strongest voice and most diplomatic victories tended to hold total sway of the council. This system of government lead to a political fracturing between the 'actionist' faction seeking to continue militant action towards the Federation and a more moderate faction seeking continued peace. (FASA RPG module: Demand of Honor) This dispute and other democratic woes evidently lead to greater centralization as by the late 23rd century the state was ruled by a King, an old head of state who delegated his authority to several vassals who became at odds with one another for supremacy of the Hegemony. The king himself was sheltered from these political problems by those loyal to him. This led to degradation within the Gorn government. It was believed that, without a strong leader, the Hegemony might eventually collapse and fall into civil war. (TOS video game: Klingon Academy)

In the 24th century, the Gorn Alliance consisted of many peace loving clans that maintained cordial relations with the Federation. However, equally, they were opposed by rival militant patriarchies that viewed a continued alliance with the Federation Grand Alliance as being both demeaning as well as restrictive. This led to rival factions battling one another for power over the Gorn government across years and even led to renegade Gorn attacking Federation targets in order to provoke a war between the two. However, many of the rogue Gorn were destroyed though continued Federation presence within Gorn space had provoked an irritated reaction from what few rebels remained. (FASA RPG module: Star Trek: The Next Generation Officer's Manual)

One political group within the Hegemony consisted of the Black Crest who attempted a coup against the government in order to engage in aggressive action against the Federation. (TNG comic: "The Gorn Crisis")

The monetary unit used for transactions within the Gorn Hegemony is the Szeket. (VAN - Declassified novella: The Stars Look Down) 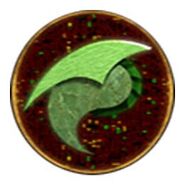 The Gorn species were noted to be aggressive and almost primitive by Klingon tacticians though they were quite intelligent which meant that it was a mistake to underestimate them at any point. The Gorn attack approach involved the use of brute force with overwhelming attacks against their enemies rather than making use of finesse involved in carefully planned strikes. As such, a Gorn was more likely to slug their way out of a situation then think of a solution through it. (TOS video game: Klingon Academy) Another racial trait was a devotion to the Gorn Imperative where they believed that only the strong survived and that their race should not tolerate any form of weakness. Extreme forms of this belief led to the Gorn ruthlessly butchering their own kind who demonstrated any kind of weakness to their foes. (TNG comic: "The Gorn Crisis")

Despite the political problems of the Gorn Hegemony, it was known that in the 2280's that the Gorn state possessed a strong, disciplined military that prevented overt attempts against Gorn colonies.

Gorn Space Command was the primary defense organization that managed the Hegemony. Even though the Gorn possessed fewer ships compared to their neighbors, the Space Command maintained a fleet that was highly feared by its enemies. Gorn officers were highly trained with a great deal of combat experience. This combination made the Gorn a fearsome foe to face in battle. An elite military unit included the King's Fleet Guard that was a part of the Gorn armed forces. (TOS video game: Starfleet Command)

The Gorn Hegemony was located between the portion of Federation space extending from the center of the galaxy along the Alpha and Beta Quadrant border and the Klingon Empire. (ST reference: Star Charts) This positioned the Hegemony squarely between the galactic arms which contained a sparse region of space with only a few habitable worlds that the Gorn had colonized. (TOS video game: Starfleet Command)

Gorn fleet, landing on the planet.

Gorn soldiers during the invasion of a colony world. 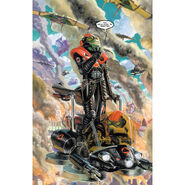 The ebook The Dominion War Sourcebook: The Fires of Armageddon, published by Last Unicorn Games after they had lost their Star Trek license, states that in 2373, the Gorn signed a non-aggression pact with the Dominion.