Gothos was an artificial class R planet created by Trelane within a star desert in the galaxy's Alpha or Beta Quadrant.

Gothos had a variable atmosphere and geologically active surface. (ST reference: Worlds of the Federation)

It was a rogue planet not requiring a star for energy. (Decipher RPG module: Worlds)

It was located 900 light years from Earth and eight days from Beta VI at the outer edge of quadrant 904. Its size was coded magnitude 1-E. It was previously uncharted and a natural radio source, producing strong interference with subspace communications. It was iron-silicate-based with constant volcanic activity. Its toxic atmosphere and hostile, hot climate were prone to tornadoes, with a pressure similar to Earth, but respirators were required as it lacked oxygen.

Gothos was fabricated by Trelane, and his parents allowed him to keep the world. Trelane produced an Earth-like oasis on the surface with fresh air, a forest of trees and flowering vines.

In 2267, the Federation starship USS Enterprise discovered the planet while traveling through the star desert at warp three en route to Beta VI. Trelane played cat-and-mouse games with the starship, at one point propelling the planet at high sublight velocities. (TOS episode & Star Trek 11 novelization: The Squire of Gothos)

Its last known position was at coordinates -132.6, -125.7, -114.3 in the general vicinity of Daran and Memory Alpha within treaty boundary quadrant 3. (ST reference: Star Trek Maps) 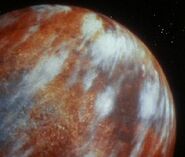