Great Seal of the United Federation of Planets

The Great Seal of the United Federation of Planets is the official emblem of the Federation, serving as a visual symbol of the UFP and the principles for which it stands. The Great Seal is incorporated into the Federation Flag and is often displayed on government documents, at official events, and on Federation Starfleet computer screens and communications services. (ST reference: The Star Trek Encyclopedia)

There have been a number of variations on the Great Seal since the Founding of the Federation. (ENT episodes: "Zero Hour", "In a Mirror, Darkly", TOS movie: The Motion Picture, TNG episode: "The Naked Now", DS9 episode: "Homefront")

Variations of the Great Seal of the United Federation of Planets[] 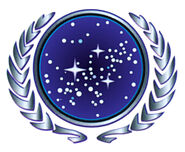 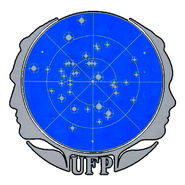 The Great Seal seems to be based upon the emblem of the United Nations, which can be seen here.