This article is about the TOS comic. You may be looking for STO mission: "Ground Zero".

unknown
"Ground Zero" was a 10-page Star Trek: The Original Series comic strip. It was the 28th weekly story arc in the UK comic strips series, published in five installments in Valiant and TV21 in 1972. In this story, a shuttle crew visited an unexplored planet.

Teaser, 5 February, 1972
Damaged in a meteorite storm, Enterprise put down for repairs on one of four moons in orbit around a planet charted merely as 656. As maintenance teams got to work, Captain Kirk, Mr. Spock and two crewmen went down in a shuttlecraft to investigate the parent planet...

A shower of magnetically-charged meteors disables shields and communications, leading to significant damage to the USS Enterprise's starboard warp nacelle. The starship makes a soft landing on an airless moon to make repairs. Meanwhile, a probe sent to nearby Planet 656 has found a transmitter station near a shoreline, so Kirk takes a team in a shuttle to look for other signs of intelligent life. While they are at the station, a large dinosaur emerges from the water and swipes at Morton. Kirk runs to his aid, then both fall through a sinkhole into a sloping, sand-filled cavern.

Spock and Ferris drive off the animal with the shuttle. Spock discovers that the station is ground zero for an impending missile test. He alerts Nyota Uhura in hopes she can contact the natives in time. He orders Ferris to leave in the shuttle if he doesn't return in two minutes.

Spock tosses a length of rope down the sinkhole to Kirk and Morton, but as they try to climb up, the sand gives way, dragging Spock with them. They descend into a cavern lit by bioluminescent fungus. Flailing tentacles suddenly grab them – Morton thinks they are about to be devoured by giant, flesh-eating mushrooms.

Ferris returns to the Enterprise as ordered. Uhura establishes contact with the Planet 656 natives, but it is too late – the missile will strike in seconds. Below ground, the landing party are hurled into a gravity lift and whisked to safety. The giant mushrooms are the sentient natives. Through Spock's universal translator, they apologize for handling them so roughly in order to save them from the blast. 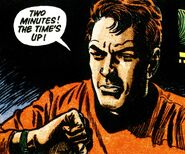 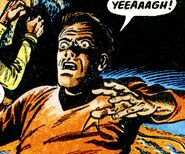