Harlan Ellison's The City on the Edge of Forever, Issue 1

Harlan Ellison's The City on the Edge of Forever No. 1

Solicitation text
For the first time ever, a visual presentation of the much-discussed, unrevised, unadulterated version of Harlan Ellison’s award-winning Star Trek teleplay script, 'The City on the Edge of Forever!’ This Hugo- and Writer’s Guild of America Award-winning teleplay has been much discussed for decades but only here can you see the story as Mr. Ellison originally intended!

Life aboard the USS Enterprise is far from glamorous. The rigours of an extended stay manifest differently in each crewmember. For Lieutenant Lebeque, that stress had manifested itself in an addiction to "jewels of sound", the most banned substance in the galaxy supplied by the unscrupulous Beckwith. Supplied a jewel in exchange for a spot on the next landing party, Lebeque awakens on the bridge two hours later in the middle of a scolding by Spock for in his delirious state, he has nearly overloaded the engines. Realizing the depths of his addiction, Lebeque tells Beckwith he will be turning him in prompting a violent retaliation. Beckwith makes his way to the transporter room and seals it from within, beaming down to the surface to make his escape. Undeterred, Kirk merely orders security teams down after him.

Materializing on the surface of the barren planet, the away team follows Beckwith's tracks while pondering the mystery that a world so old and so far from its red star be still able to sustain life. Rand then pinpoints the source of the mysterious radiation the Enterprise has been tracking: the mountains where Beckwith's tracks lead. As the crew breaks through the fog, they are greeted by the impossible sight of a crystalline city untouched by time and perched atop the mountains. A city...on the edge of forever.

Approaching the city, the crew meets six crystalline "ghosts" who identify themselves as the "Guardians of Forever" who have lived in the city since before Sol formed and have settled on this world due to its unique connection to the flow of time. At Kirk's queries, the Guardians demonstrate this ability by channeling pure matter into a portal to Earth's past from the era of the dinosaurs to the 1930s. The Guardians reveal that though it is possible to travel back to the past none do so due to the dangers. Time, contrary to Spock's belief, is not rigid. It can be changed, bent and added to but should those changes be too much, then the flow of time, the very universe could be irrevocably altered. At that, Spock understands the strange readings and phenomena they have been encountering. A zone of no-time has been created on the planet. If the Guardians could manipulate time and matter, then how much easier would it be to manipulate the atmosphere of a planet?

As the Guardians display their admiration at lesser species so readily grasping the basics of their super-science, Beckwith makes himself known and leaps directly into the time portal...

Ship's log, star-date 3134.6.
Our chronometers still run backward. We have followed the radiation to its planet-source here at the rim of the galaxy, but something else is happening…When we left Earth, each of the 450 crewmembers of the Enterprise was checked out stable. But it's been two years—so much stress on them. We have continuous psych-probes, but we know some have been altered. Even some who may have gone sour: We can't know until the flaw shows up. And by then, it's too late… Much too late…

Ship's log, star-date 3133.4.
This cinder, this empty death of a world. This is the source of the strange radiation that had our clocks running backward. How odd that Beckwith should choose this ghost of a world for his escape. I am transporting two shifts for patrol—Rand, Spock, myself, and six enlisted crew. We'll find him. 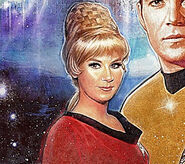 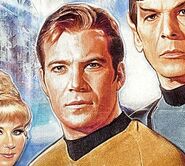 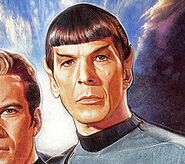 Beckwith.
Add a photo to this gallery

Retrieved from "https://memory-beta.fandom.com/wiki/Harlan_Ellison%27s_The_City_on_the_Edge_of_Forever,_Issue_1?oldid=685066"
Community content is available under CC-BY-SA unless otherwise noted.