The Original Series (US Comic Strips) No. 7

7988.3
"Heads of State" is a Star Trek: The Original Series comic strip. It is the seventh story in the US Comic Strips series, published in 60 daily installments by the Los Angeles Times Syndicate in 1981. The story was set after TOS movie: The Motion Picture, depicting events from Captain Kirk's second five-year mission aboard the refit USS Enterprise. In this story, Kirk must avert war with the Klingon Empire when a Federation world threatens secession.

Captain's log, stardate 7988.3.
We are approaching the planet Zeta-Atez, the largest of a confederation of six large and twelve lesser planets known as the Gates of Scylla. Stability in this sector is vital because Zeta-Atez is the only source of lozite-M, an anti-magnetic bio-metallite critical to current state-of-the-art weaponry.

Little is known about Imperator Dykranus, the new ruler of Zeta-Atez, who twice said he'd secede from the Federation, prompting Klingon ships to mass at the Neutral Zone, seeing an opportunity to possess lozite-M. With Dykranus' health a mystery, James T. Kirk takes Spock, Leonard McCoy and Christine Chapel with him on the diplomatic party, beaming down in dress uniforms.

Captain's log, stardate 7988.3.
We have entered orbit at Zeta-Atez, the largest of a group of six large and twelve smaller planets known as the Gates of Scylla.

Prime Minister Chak seems overly protective of the napping, reclusive ruler while arranging a tour by aircar, including a look at fields of the razor sharp lozite-M. Dykranus is rude as he announces Zeta-Atez would withdraw from the Federation, but then yields to another nap. Concerned for the man's health, the team sneaks out to meet him again, navigating a protective maze of lozite-M. Meanwhile, outposts are on Code One alert, expecting war with Klingons.

Guards catch the landing party at the base of the imperator's cloister building, but Dykranus spots them and asks them to be brought up. Seemingly unaware that he'd previously met them, he shows them plans for a celebration of the planet's 50 years as a loyal member of the Federation, then falls asleep again. Suspecting schizophrenia or twins for his personality changes, Chapel and McCoy ease off his headdress to reveal he has two heads. The other head awakes, manic and reactionary, and threatens the group with a branch of lozite-M. But he stumbles and falls, and the branch severs one of his heads.

Chapel and McCoy perform a radical dichotomectomy in sickbay while Kirk speaks privately with Chak. McCoy mentions he'd unsuccessfully tried the procedure on Alkuk VI. This time they succeed. The friendlier Dykranus awakes, thankful for the help, now able to leave his palace, the threat of war ended.

Dykranus: It feels so odd to have only one head.
McCoy: You'll adjust. It's not so bad, once you're used to it. 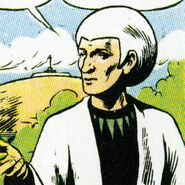 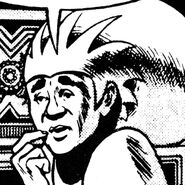 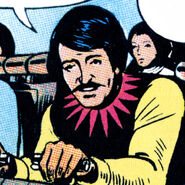