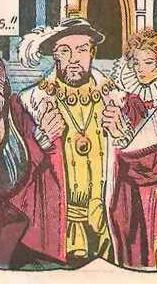 Henry was studied by the 23rd century historian Alexander Lazarus, who created an android, with the psi-clone, and imbued it with Henry's personality and history. This android, like other androids of Lazarus, created a city on Gamma Alpha V. He was likely destroyed in the explosion of Gamma Alpha V on Stardate 10:26.3. (TOS comic: "The Legacy of Lazarus")

In 2367, Lieutenant Commander Data told his then girlfriend Lieutenant Jenna D'Sora that Henry's second wife Anne Boleyn was greatly upset by the revelation that he preferred to spend time with his huntsman over her. (TNG episode: "In Theory")

Retrieved from "https://memory-beta.fandom.com/wiki/Henry_VIII?oldid=645165"
Community content is available under CC-BY-SA unless otherwise noted.