male, female
Hephaestans were a humanoid species native to the planet Hephaestus, a neutral planet in the Kyros system. They were a species of chimpanzee.

In the year 2274, James T. Kirk found them “a friendly and intelligent, but naive people, which makes them ripe for Klingon conquest.”

An underground manufacturing center built intelligence-augmenting, subcutaneous symbionts for the native population, who were not born intelligent. A small chip was implanted in the base of the skull during a ceremony shortly after birth.

Klingons discovered this aspect of their society in the year 2274. Commander Kagg intended to circumvent the Organian Peace Treaty by destroying the manufacturing center and removing the symbionts, in effect redefining the planet as having no intelligent life. The treaty would then no longer apply, and the Klingon Empire could annex the planet without interference. However, Kagg was killed in the explosion, and USS Enterprise technicians rebuilt the symbiont facility. Simaya felt certain the high council would now side with the Federation, and award them mining rights for pergium and dilithium. (TOS comic: "All the Infinite Ways") 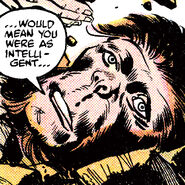