Home is the Hunter

The Original Series No. 52

A dispute over a planet and its primitive people leads Captain Kirk and a Klingon commander to pit their ships against each other in battle. But the fight is stopped by a mysterious and powerful alien being named Weyland, who decides to punish three Enterprise crewmembers with their own history. He places Sulu in feudal Japan during the period's most important and bloody power struggle, Scotty in 18th century Scotland on the eve of the revolt, and Chekov in WWII Russia.

Now the three time travelers must face overwhelming dangers as they are pulled by conflicting forces: their allegiance to their homelands, their duty to the Federation they serve, and the demands of history.

The Nazi SS man smiled into Chekov's face, his jaw jutting outward in a cocky grin. "Do you have any final words?" asked the SS man.

Chekov smiled, inwardly pleased at his composure during what were undoubtedly his last moments on Earth. "Your Führer is going to kill himself, and your precious Reich is going to stand as a symbol of all that's vile," he said evenly.

The Nazi shoved them against the wall and stepped away. Chekov took his place next to Kirk as the American muttered, "Don't worry."

Chekov looked at the firing squad before them, raising rifles and taking dead aim.

The Enterprise arrives at the mineral-rich planet Cragon V several months after the Klingons have already made contact. James T. Kirk, Montgomery Scott, Hikaru Sulu, Pavel Chekov and Lieutenant Garrovick beam down and present themselves before Weyland, the ruler of the planet, whom his subjects believe to be a god. Kral, the commander of the Klingon battle cruiser IKS Ghargh, also seeks audience with Weyland, who is scornful of both the Federation and the Klingons. Outside Weyland's castle, Kral's first officer, Kbrex, goads him into fighting the Starfleet men. When Kbrex throws a plasma grenade, a native child picks it up. Garrovick tries to take it from him, but both are killed when the grenade goes off.

As the landing party beams back up, the Ghargh decloaks and fires on the Enterprise. Weyland disables both ships, then appears on the Enterprise viewscreen. Considering the Federation hypocritical and therefore worse than the Klingons, he punishes Kirk for the death of the child by making Scotty, Sulu and Chekov vanish from the bridge, telling Kirk that "They are lost in time out of mind."

Sulu arrives in Japan in 1600, where he helps rescue the Lady Oneko from a band of assassins who attack her escort. Oneko, who is pregnant, is the youngest concubine of Torii Mototada, the lord of Fushimi Castle. Sulu accompanies Oneko and Watanenabe Sadayo, Mototada's sword master, to the castle, where he swears allegiance to Mototada.

Scotty awakens in Scotland in 1746, where he finds shelter in the barn of an inn called The Hanged Woman. When he attempts to steal food from the inn, a teenaged boy named Seamus MacIntyre shields him by giving a false description of the intruder, and later finds clothing for him.

Chekov finds himself in a Nazi prison camp in 1942 Stalingrad, wearing a German uniform. Two other Russians have entered the camp disguised as Germans. One of them, not realizing Chekov is Russian, shoots at him and strikes him on the helmet, and Chekov is captured by the Nazis. Awakening in a cell, he is shocked to discover that his cellmate is a United States Army Air Corps lieutenant named John C. Kirk.

In 1746, Seamus helps Scotty get a job at the inn. In 1942, Chekov learns that John Kirk has no male relatives to carry on the family name. They are joined in their cell by Sergeant Ivan Romanoff, the Russian soldier who mistakenly shot Chekov, who is an acquaintance of Kirk.

In the present, Vladra, a member of the science department on the Ghargh, has feelings for Kral. Deciding to warn him that Kbrex is plotting against him, she is surprised by Kbrex when she enters Kral's quarters. Kral arrives in time to save her, but is defeated in combat by Kbrex, who takes command of the ship and puts Kral and Vladra in the brig.

In 1600, Mototada's lord, Tokugawa Ieyasu, asks him to hold Fushimi Castle against Ishida Mitsunari's army. Sulu realizes that everyone in the castle is destined by history to die in the siege. In 1746, William, Duke of Cumberland, arrives at The Hanged Woman with his staff of English officers. In 1942, Chekov is interrogated by the Nazis; when he is returned to his cell Ivan is gone, but Chekov's injuries make John Kirk less distrustful of him. The next day Chekov and Kirk are led out before a firing squad.

Vladra tells Kral she loves him, and he starts to return her feelings. With the Ghargh's engines inoperative, its orbit begins to decay. Kbrex orders Kral and Vladra ejected from an airlock. They barely have time to put on damaged environmental suits before being blown out into space.

In 1600, Mototada orders Sulu to escort Oneko to Edo.

In 1746, Seamus is caught trying to murder the Duke; he is about to be executed when Scotty pulls him onto the back of a horse and rides away with him. In 1942, The Nazis fire blanks at Chekov and John Kirk to torment them, but they are rescued by Ivan and the Russian army, which begins shelling the camp. Kirk and Chekov escape to a transport plane.

Kirk confronts Kral and Vladra, who are under guard on the Enterprise; Kral remains defiant and is stunned by a security guard.

In 1746, With their pursuers far behind, Seamus tells Scotty he is a spy for the Scottish forces. The two men come upon a cottage occupied by a teenage girl named Megan, whose father and brother were hanged by the English, but are trapped inside with her when their pursuers catch up to them. In 1942, Chekov is shot in the shoulder as he pulls Ivan into the taxiing plane. In 1600, Sulu, Oneko and their party spend two nights at a farmhouse where Oneko's condition forces her to rest. As they approach the inn Minaguchiya, Oneko playfully climbs onto Sulu's back as they ford the Okitsu River, causing them to be swept away by the current.

Kirk convinces Kral to join forces with him to confront Weyland.

In 1746, Scotty, Seamus and Megan are rescued by a band of Scottish soldiers. In 1942, Chekov loses consciousness as the plane approaches an airstrip in Stalingrad. In 1600, When Sulu manages to get himself and Oneko to shore, she kisses him. While at the inn they visit the Seikenji monastery, where Sulu scratches their names on a stone in the temple garden.

Kirk and Kral attempt to leave the Enterprise in a shuttlecraft, but the shuttlebay doors will not open. Kirk flies the shuttle directly at them and Weyland allows them to open at the last moment. Furious at Kirk and Kral's departure from the Enterprise, Kbrex sends Weyland a message offering to thwart Kral's supposed plans to attack Weyland's people.

In 1600, The inn is attacked in the night by ninjas; Sulu is knocked unconscious and Oneko is taken. Sulu confronts the ninjas on a beach, where Oneko reveals herself as one of them. They ride to a farm belonging to Oneko's ninja clan. She was a spy in Mototada's house, substituted for the real Oneko, who died of a lung illness while on the way to become his concubine. Oneko's uncle demands information from Sulu about Mototada's battle plans; Sulu refuses to answer.

In 1746, In Inverness, Bonny Prince Charles is amused by Scotty's predictions of his ultimate defeat. General Murray suggests capturing the cannon from Fort Augustus, and Alexander Keppoch, laird of the Clanranald, asks Scotty to transport the cannon to Inverness.

In 1942, Chekov awakens in a Moscow hospital, where General Vassili Chuikov mistakes him for his late brother's son. Chuikov asks Chekov to join the Russian army; the presence of a suspicious KGB man, Paulvitch, leaves Chekov no choice but to agree.

In 1746, Scotty and Seamus embark on what Scotty describes as "a suicide mission" to breach the wall of Fort Augustus from the inside with gunpowder. They enter the fort by riding on the underside of a wagon, but Scotty is captured as they remove powder barrels from the magazine. In 1942, Chekov is summoned to the Kremlin to meet Joseph Stalin and be named a Hero of the Soviet Union, but Paulvitch remains suspicious of him. In 1600, Sulu is saved by an attack on the ninja camp led by Sadayo. They later return to the ninja compound, where Sulu rescues Oneko from the battle.

In 1746, Seamus blows up the magazine and rescues Scotty. He confesses that he had intended to leave the gun with Scotty after killing the Duke, framing Scotty as the spy; Scotty forgives him. In 1942, Training with his new squadron, Chekov plans to fly to Sweden to escape the Soviet Union. He fights and knocks out Paulvitch when the KGB man tries to stop him, but General Chuikov arrives in the hangar.

On the way to Weyland's castle, Kirk and Kral come upon the hut of the parents of the child who was killed; Kbrex catches up to them. Kral tells Kirk that Kbrex is his brother. Kirk and Kral escape into the woods, where Kbrex is killed by a trap he himself set.

In 1600, Sulu refuses to take Oneko to the mountains and live without honor; he brings her to safety in Edo and returns to Fushimi Castle. In 1746, Returning across the moors to Inverness, Scotty comes upon the cottage of a mysterious old man who serves him fine whisky. Scotty has a vision of the land personified as a woman, whom he initially mistakes for his mother. In 1942, Chuikov assumes Chekov is in the hangar preparing for his squadron's secret mission to escort Averell Harriman partway to London.

In 1600, As the inevitable end of the siege of Fushimi Castle approaches, Sulu rides out into the enemy. In 1746, The Scots are massacred at the Battle of Culloden. Megan finds Scotty, wounded in the side, and brings him to a cave where Seamus is hiding, having suffered a concussion. Seamus slowly recovers, but Scotty is dying. He makes Seamus promise to make a life for himself and Megan, then crawls out of the cave in the night to die. In 1942, Over the Baltic Sea, Chekov realizes that the pilot of Harriman's transport is John Kirk. When they are attacked by German planes, Chekov abandons his plan to escape, fighting to save his captain's ancestor. Kirk escapes, but Chekov loses a wing and bails out into the ocean.

Impressed by the honorable actions of Kirk, Kral, and the three time-lost officers, Weyland restores control to the two ships and returns Scotty, Sulu and Chekov to the Enterprise. Kirk and Kral report that their respective fleets should avoid Cragon V in the future. Scotty learns from the Enterprise computer that Seamus and Megan MacIntyre were direct ancestors of the inventor of the Jeffries tube. At the Data Library in New Stalingrad, Chekov learns that he was believed killed in action. In Japan, Sulu and Dr. Yae Takenada, an archeologist, find the stone engraved with Sulu and Oneko's names in the temple garden.

"Under the wide and starry sky,
Dig the grave and let me lie:
Glad did I live and gladly die,
And I laid me down with a will!
This be the verse you grave for me:
Here he lies where he longed to be;
Home is the sailor, home from sea,
And the hunter home from the hill." 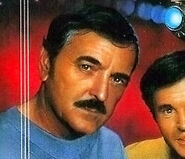 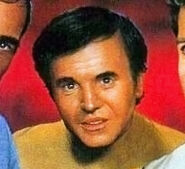 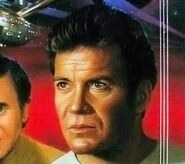 James T. Kirk.
Add a photo to this gallery

Retrieved from "https://memory-beta.fandom.com/wiki/Home_Is_the_Hunter?oldid=751575"
Community content is available under CC-BY-SA unless otherwise noted.