49640.1
Homeostasis, Part One was the fourth issue of Marvel Comics' 1996 series of Star Trek: Voyager comics and the first to feature Howard Weinstein as a writer. The issue consisted of a 22 page story penciled by Jesus Redondo and inked by Sergio Melia, with Bobbie Chase credited as editor.

Captain's log, Stardate 49236.3
After two weeks travel through an unusually barren stretch of the Delta Quadrant, Commander Chakotay reports that Voyager is running low on supplies of all kind... The ship and crew are showing more wear and tear than i'm comfortable with. We hope to remedy the situation soon.

In a one of the Jefferies tubes of Voyager's engineering, Chief engineer B'Elanna Torres reports to Captain Janeway that the main phaser array base channels have as sustained structural stress fractures and that a full power phaser blast would crack them like eggs-shells. She and Torres come to the conclusion that they need Duranium. An hail from Neelix summoning Janeway to the mess hall cuts their conversation short. Once there she finds Neelix in the kitchen and as they discuss the sparsity of supplies the ship is rocked by a tremor. The bridge immediately reports to Janeway that they are under attack by a Kazon raider.

Once on the bridge, Chakotay reports that a single ship is responsible for the assault. As the Kazon ship maneuvers to make another pass, Janeway orders Lieutenant Commander Tuvok to set the phasers at one-one-hundredth of their power and aim to miss. Reluctant to showing that their phaser are almost useless she also asks for a photon torpedo to be launch simultaneously. Once the raider gets in range, Voyager fires, hitting the Kazon ship's starboard engines, forcing them to retreat. Janeway remains suspicious about their encounter as pointless unprovoked attacks are not the Kazons style. She orders for yellow alert to be maintained and heads back to Neelix to see if he as any ideas.

Janeway runs into Neelix near the Airponics garden, as they walk towards the garden she asks if he as any ideas were to find duranium. He tells her about Praja, a Camborg colony he visited several times some years ago. In the garden they find Kes harvesting kapkap melon bushes.

Captain's log, supplemental
According to Neelix, the Cambrog colony, one of several in this sector, has been on Praja for more than twenty years... With its prosperous mix of mining and agriculture, we hope Praja will fill our pressing need for food and duranium.

As the USS Voyager gets in range of Praja, Neelix notices that something is wrong. He notes that the inviting green look of the planet is gone and there are plums over the Orshan continent where the main colony is located. Ensign Kim reports that sensors show fires burning through forests and agricultural development’s, they also showed massive destruction of floral life across the surface.

Janeway, Neelix and Kim head to sickbay where The Doctor informs them that the planet as suffering from botanical plague and if it remains unchecked, it will consume all plant life on the planet. He assumes that the fires were probably futile attempts at stopping the plague. Kes reports that here are large herds of dead animals on every continent. Kim also reports that the settlements are deserted. Janeway tells Chakotay to assemble an away team and to bring Neelix and Kim along, Kes requests to be part of the team and Janeway accepts, much to the dismay of Neelix of fears for her safety.

Later Janeway is in the mess hall and orders Darjeeling tea and a slice of New York City Cheese cake from the replicator but Neelix comes up to her offering a dish of kapkap pudding. Janeway reluctantly accepts as she had her mind set on cheese cake and much to her surprise she finds the pudding delicious. Neelix takes this time to request that Kes be taken off the away team, as he shares his concerns with the captain, he does not notice Kes who is standing behind him. Janeway leaves before Kes storms out, furious at Neelix's behavior.

The away team beams to the colony only to find a ghost town. The sight reminds Kes of the nightmare she had about the world decimated by polaric energy. Not wanting to lose any time Chakotay orders Kim and Kes to head to the fields and gather fauna and flora samples while he and Neelix investigate the fate of the colonist.

In the fields they find nothing but devastated land, Kes asks Kim if they would be allowed to help the Cambrog if this disaster was an attack on the colony. He answers that if she is talking about the Prime Directive then it depends on if a colonist survived and asked for Voyager's help. Kim's tricorder eventually picks up trace of a virus as Kes stumbles on a large number of dead animals. They gather samples and the away team beams back to Voyager for further analysis.

Captain's log, supplemental
Voyager continues to hail the colonists on all channels, with no response... The away team as returned safely... With nothing but bad news... And no sign of the Cambrog.

In sickbay, The Doctor certifies that the virus is strictly botanical after performing autopsies on the animal remains found, the results show that the beasts starved to death. Kim and Kes report that their primary analysis of the virus shows nothing much on its origin other then it is not native to Praja. Tuvok tells Janeway that he might have a clue to the origin of the virus as sensors have located an impact crater that might be the result of a comet, asteroid or a missile. In order to determine which it is , he will need to study the site further.

After transporting back to Praja's surface, Kim and Tuvok located five missile-craters and scans show that all missiles casing were built by the same alien alloy. Janeway asks that Tuvok recovers a few sample for Torres, she then leaves for engineering leaving Paris in command of the bridge. When Janeway arrives she finds Torres that reports that their phaser array is now completely off-line. Frustrated Torres asks Janeway why don't they just beam down and take the duranium. Janeway explains that they need to make sure that none else lays claim to the resources on the planet and that Neelix believes that there might still be some colonist hiding in the caves.

Back at Praja's barren foothills , Neelix and Chakotay keep searching for survivors. Neelix leads Chakotay to the mining site where the Cambrog had safety shelters. After entering the cave Neelix slips and tumbles down to the ground. On Voyager, Kim informs Janeway that the senors show twelve other locations in the vicinity of Praja who have suffered the same fate. Kim identifies some sort of automated ore processing machinery and gets a visual on screen. Rather surprised that colonist who refused to use chemical fertilizer for their crops would resolve to such practices, she send Tuvok and Kim back to the surface to gain more information on the occurrence.

In the mining cave Neelix gets up from his nasty fall as Chakotay reports picking up traces of duranium. Neelix theorizes that the fact that the Cambrog were in possesion of such mineral riches, their hospitable nature and their indifference to self-defense might push someone to attack them. As they travel the cave they suddenly fall in hidden hole, landing in a pit of mud.

Meanwhile on the surface, Kim and Tuvok have located the machinery and make their way to its control room. When they survey the room they find nothing familiar except for the fact that the machinery is composed of the same alloy as the weapons casing they found earlier. Accidentally Kim flicks a switch.

In deep space three alien ships with Kazon crews receive a signal from the planet showing that someone as tempered with the mining station. The Kazon Maje orders for the ships to proceed to Praja at maximum warp.

The Kazon destroy a planet. Then head for Voyager!

Away team at Cambrog colony 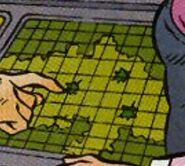 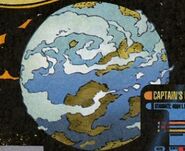 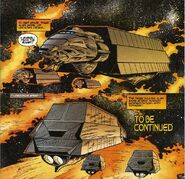 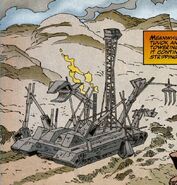 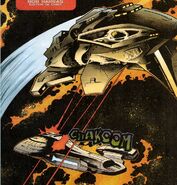 Homeostasis, Part One article at Memory Alpha, the wiki for canon Star Trek.