49641.8
Homeostasis, Part One was the fifth issue of Marvel Comics' 1996 series of Star Trek: Voyager comics and the second to feature Howard Weinstein as a writer. The issue consisted of a 22 page story penciled by Jesus Redondo and inked by Sergio Melia, with Bobbie Chase, Mark Paniccia and Tim Tuohy credited as editors.

First officer's log, supplemental:
Neelix and I are trapped in a tunnel deep beneath the Prajan surface. With communicator signals blocked by mineral formations, it looks like were on our own.'

Commander Chakotay raises Neelix on his shoulder who tries to grasp a hold in hopes of climbing out. Unfortunately he fails; Chakotay starts studying their surrounding and estimates that the hole was probably built by Cambrog colonists in hopes of trapping animals. Footsteps approach and suddenly a group of humanoids stands at the top of the hole pointing spears over their heads and blinding them with a light. Neelix recognizes one of the strangers voice as his former Cambrog contact; Ryah. Ryah also remembers Neelix who still owes him from their last trade.

On one of the Kazon controlled alien ship. The First maje give a correction to another Kazon who questions is orders when a bridge officer informs him that sensors have identified the ship in orbit of Praja as the USS Voyager. The Maje rejoices at the idea of achieving what the Kazon-Nistrim as been unable to in destroying the Federation ship.

Captain's log, stardate 49641.8: The Cambrog survivors found by Chakotay and Neelix have refused our offer to evacuate them. Instead we will provide emergency supplies and rations, in return for permission to find and mine the duranium ore Lieutenant Torres needs to repair our phasers. The Cambrog have also asked for help in stopping the botanical plague ravaging their world. Kes and Ensign Kim have been working on the problem.'

Captain Kathryn Janeway enters the Airponics garden where Kim and Kes report that they have found four possible antidotes but without field tests they can't be positive. Janeway reluctantly accepts to send Kes, Chakotay Kim and Neelix back to the surface, seeing as this is probably the last chance they have of saving the Cambrog colony.

Back in the mines of Praja the away team delivers the supplies to the Cambrog. Kes takes a few atmospheric readings with her tricorder as they go deeper in the cave. At the settlement, she explains to Chakotay that the deeper they got the higher the level of airborne toxins generated by the off gassing of the ore deposits, thought they are not at risk, long term exposure will prove fatal. Chakotay decides to exit the caves and report to Janeway.

Janeway transfers the findings of the away team to sickbay, hoping that it might help The Doctor. Tuvok informs her of three large ships of unknown origins are on an intercept course. Voyager goes to Yellow alert as Tuvok tries to hail the oncoming ships with no success.

The alien ships open fire on Voyager who tries to retaliate with torpedoes. The Kazon Maje hails Voyager and notifies them that Praja belongs to them and if Voyager does not retreat they will destroy them. With a minor hull breach, damage to decks 9 through 11 and the forward torpedoes launchers off-line, Voyager is obviously out manned and out-gunned. Janeway orders a temporary retreat. Janeway informs Chakotay on the surface of the recent developments. He acknowledges and Voyager breaks orbit.

In the tunnels of Praja, Chakotay finds Kim and Kes and ask them about their progress. A frustrated Kim explains that none of their antidotes seems to work, leaving him to wonder if their going at this the right way. Chakotay informs them that, he and Neelix, are going to mine the needed duranium.

Tuvok and Janeway go over the situation as they make their way to engineering where Torres is completing the last of repairs on Voyager. She informs the captain that all she needs now is the duranium for the phaser array. The away team communicates with Janeway and let her know that they have mined all the duranium they can carry. Lieutenant Paris tells Janeway that he as an idea to recover the away team.

Voyager returns to Praja's orbit and suddenly plunges towards the surface in an erratic pattern. She informs the Kazon that the ship as suffered a severe malfunctions and cannot regain control. Once Voyager enters the atmosphere of Praja. Janeway orders for the away team to be beamed back to the ship. As Voyager continues its run towards the surface Janeway orders for a torpedo to be fired at the surface. The impact leads the Kazon to believe that Voyager as crashed on the planet.

Captain's log, stardate 49842.1: Our deception seems to have succeeded in buying us some time and Neelix confirms that the ships used by the Kazon to attack us were taken from the Narrdi Collective - Expert minors who've skirmished with the Kazon for years. I believe the Prime Directive gives us plenty of leeway to stop the Kazon and help the colonists.

Janeway compliments Paris on his flying as Voyager lands on the surface of Praja. In the airponics garden, Kes finds all the grown plant samples to have died except for one. Janeway comes back to the bridge and informs Paris that the phasers are repaired and it is time to even the score. Tuvok orders everyone to battle stations as the red alert echoes on the bridge. Voyager lifts off the surface and heads back to space.

In sickbay Kes shares her finding with The Doctor who explains that the plague was designed to attack bacteria that allowed the plant to get her nutrients from the soil. It would seem that the said bacteria kept mutating until it a natural resistance. In The Doctor's opinion it is now possible to repel the plague and restore the ecosystem.

The re-surging starship surprises the Kazon, with its renewed firepower; Voyager pounds the Narrdi vessels with continuous phaser fire. The three Narrdi vessels are no match for the intrepid-class ship and retreat immediately. Janeway congratulates her crew on their performance.

Captain's log, supplemental: According to Kes and The Doctor the mutated-plague resistant bacteria would eventually spread across Praja and naturally restore the flora...But that could take decades. To speed up the process and give the colonists a real chance at survival, they have replicated the healthy bacteria...Which Voyager is spreading across the planet...But my highest commendation goes to Kes, for trusting her instincts and saving the Cambrog colony.

As Voyager spreads the antidote across the surface, Neelix apologizes to Kes for not trusting her.

Chakotay and Neelix on their own... and in trouble 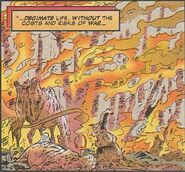