The missions "Warriors of the Empire" and "A Day Long Remembered" conclude the storyline of the Klingon Civil War of 2411. A new Task Force Operation (TFO), "Remain Klingon", is part of the "Qo'noS Endures" event.

L'Rell holds the Sword of Kahless.[1]

A command and science destroyer.

The RRW Egaruoc fights the Kazon.

"Command the Courage of the Future!" dev blog cover. 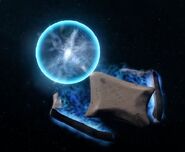 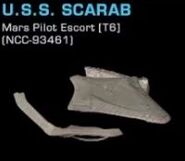