The Original Series (US Comic Strips) No. 6

Husian Gambit is a Star Trek: The Original Series comic strip. It is the sixth story in the US Comic Strips series, published by the Los Angeles Times Syndicate. The story was set after TOS movie: The Motion Picture, depicting events from Captain Kirk's second five-year mission aboard the refurbished USS Enterprise (NCC-1701). In this story, shore leave turns disastrous for two starship crews.

An unusual sense of malaise pervaded the Enterprise, leading to pranks such as gravity going out while Hikaru Sulu and Pavel Chekov sparred, food synthesizers on nine decks only providing tapioca, and bagpipe recordings being played loudly throughout the ship. Mistakes and minor fights began to appear. Even Kirk said he was on edge. Leonard McCoy diagnosed it as boredom of epic proportions. Kirk assigned shore leave in shifts while the crew conducted repairs at the nearby Hus-24 drydock.

Captain's log, stardate 7559.0. Pursuant to Starfleet directive, we have arrived at Hus-24 to carry out our biannual maintenance duty at this most remote of Federation sanctioned orbiting drydocks.

The dockmaster assigned Enterprise to a berth alongside the USS Venture, which arrived a few hours earlier. Its famous captain, Morgan Avery, introduced her senior officers to Kirk, Spock, McCoy and Montgomery Scott over dinner. Spock was surprised to learn that Science Officer Hathoz had given up tri-dimensional chess "when it no longer presented a challenge." Kirk told Avery Hus-24 was "the most boring planet in the entire quadrant," with no arts of their own, and the Husians were friendly but dull.

On the surface, crews mingled and played a game of softball. Hathoz accepted Spock’s challenge to play chess. Nyota Uhura sang a song with an impromptu band. Scott offered suggestions to two engineers to improve their grain still. Kirk and Avery explored a grain field, then spent a romantic evening in her quarters. With maintenance finished, Kirk and Spock settled their account with the dockmaster. But as they turned to leave, the dockmaster stunned them with a phaser.

They awoke with chains fastened to thick neck collars. Husians dragged them to be reunited with McCoy and Scott, also chained. Scott believed gas knocked out both crews. A Husian named Edrem proclaimed himself the leader of a revolt for being overworked and underpaid. The men would work this mine till they died, while the women would harvest grain.

Edrem gave Kirk two hours to unlock his ship's helm or 20 officers would be killed. Considering escape options, Hathoz introduced Kirk to his crewmate, Lt. Tulb. Distotians had rubbery skulls, and with some effort Tulb pulled his head out of the restraints, leaving him free to wrestle a phaser rifle away from a guard. They used the rifle's remaining power to unlock their chains. When reinforcements arrived, Kirk bluffed that the spent rifle was fully charged. They surrendered, and Chekov took their phasers.

Meanwhile, in the grain fields, Avery used a glass earring to ignite a torch. Uhura, who held the record for the 100 meter dash at the Pan-African Games, ran through the fields and created a large fire between the guards and the women. Expecting the men to be in the mine, the women headed there.

Spock noted that the ore train, full and ready to depart, was manually driven. Knowing they would be ambushed by dozens of guards the moment they were spotted, the male crew hid in the ore cars. Outside, Husians heard the train coming and barricaded the tracks with several heavy trucks. But Scott had supercharged the train's engine. It blasted out of the mine at 110 kph and smashed through the trucks, but the impact overloaded the starboard stabilizer and gyros, tossing the train cars off the track.

Scattering under phaser fire, the men fled for rocky cover. Spock noted that despite being poor shots, the Husians would eventually vaporize their cover. Over a hundred phasers were pitted against the nine held by the men. Unable to retreat or advance, they were stuck. To create a distraction, Sulu overloaded a phaser and lobbed it like a grenade to scatter five Husians. Then the men surged across a hill, overpowered a few Husians and took their weapons.

Overhearing the phaser fire, the women reached a plateau above the fighting. Avery considered pushing a massive boulder downhill, and thanks to lighter gravity and efforts of two dozen female crewmen, it fell, followed by the women who leapt into combat. With fighting on two fronts, the Husians “gave up in droves." Avery said they didn’t appear warlike, "as if that fanatic had them hypnotized." Scotty appeared, dragging a meek Edrem, who had collar keys on him.

Kirk kept the collar as a reminder of what had happened. The Husians would stand trial. As the two ships left drydock, Spock and Hathoz' chess game ended in a stalemate. 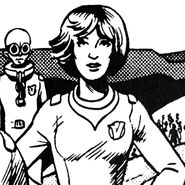 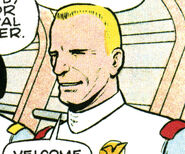 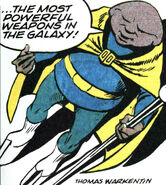 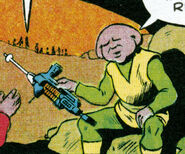 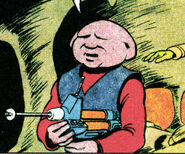 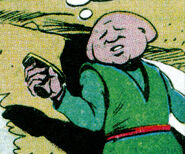 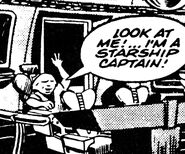 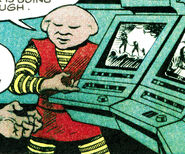 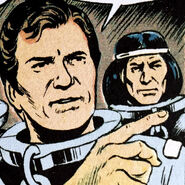 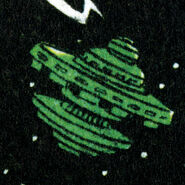 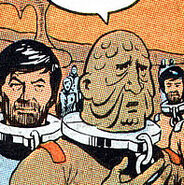 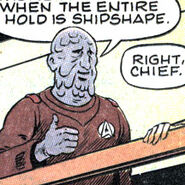 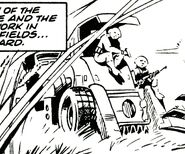