A Hybor is an Andorian animal, similar to a Terran rabbit. A hybor is generally a gentle creature, but when threatened or placed in a cold environment it will revert to a feral, savage, "were" state.

In the year 2373, Cadet Pava Ek'Noor sh'Aqabaa of Starfleet Academy's pet hybor, Kiffis, was illegally smuggled past Earth's quarantine by her mother, holo-novelist, Undieela Noor, who wanted to surprise her daughter on Academy Parents' Day.

Once on the Academy grounds, Kiffis began to pick up on negative telepathic feelings of unease projected by a pair of visiting Betazoid parents.

Soon, the pregnant Kiffis not only gave birth to numerous offspring, but went Were, and began ravaging the Academy grounds.

Pava and her Omega Squad teammates managed to lure Kiffis and her offspring into a comforting holodeck simulation of the Hybor's home environment, which caused the Hybors to revert back to their gentle state. (SA comic: "Parents' Day") 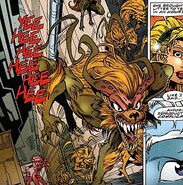 Hybors in their "were" state.
Community content is available under CC-BY-SA unless otherwise noted.