4
"IDIC, Part 1" is a comic, the thirteenth issue of the IDW Publishing Boldly Go series, the second series of ongoing Star Trek comics set in the Kelvin timeline.

Part 1 of a 6-issue mega-event: I.D.I.C! Scores of realities collide as "Infinite Diversity in Infinite Combinations" takes on a new meaning for Captain Kirk and his crew… with the fate of all realities at stake!

Previously in Star Trek: Boldly Go…
Following the events of Star Trek Beyond, the new Starship USS Enterprise is under construction. Meanwhile, Captain Kirk is the acting captain of the USS Endeavour, while Spock and Uhura take a sabbatical together on New Vulcan…

On New Vulcan, Spock and Nyota Uhura communicate with James T. Kirk and Hikaru Sulu aboard the USS Endeavour before Ellix shows Kirk unusual readings detected on the long-distance scanners. Recognizing the readings from an adventure some months back, Kirk orders the Endeavour to set course. Meanwhile on New Vulcan, Uhura is eager to return to work but wonders what their lives might be like if they were to stay on New Vulcan prompting Spock to mention the Vulcan philosophical concept of "Infinite Diversity In Infinite Combinations" that the passing of each second gives rise to a new variation and thus a new outcome.

Across time and space, in another quantum reality, Spock serves aboard the Enterprise as Commander Simon Grayson. Simon disobeys Captain Christopher Pike's direct orders and sends a shuttlecraft to retrieve the Captain from the surface of Nibiru. Far from being grateful, Pike declares he is done making excuses for Grayson and confines him to quarters until the ship's return to Earth. Simon then has a drink with Leonard McCoy but the conversation eventually turns to Grayson's deceased wife, Nyota Uhura and the man who killed her.

On a snowy planet, two Klingons await their punishment for letting Romulans escape from Rura Penthe, the punishment due to be delivered by "The Orphan" himself. The executioner soon arrives, revealing himself to an alternate Kirk. The younger of the two Klingons is unimpressed by the Human until the severed head of his father rolls into view. The Orphan uses the distraction to slay the fugitive before the elder solemnly declares he is ready to die, an attitude which The Orphan rewards with the promise that he will die with honor. Later, aboard the IKS Chonnaq, The Orphan receives a communique that their prey has been found.

Elsewhere, the Enterprise has encountered a quantum storm. Despite Grayson's confinement, Pike has the data forwarded to his terminal. Before any meaningful readings can be drawn, the Enterprise is crippled in a surprise attack by the Chonnaq with The Orphan demanding Grayson be handed over. Before the Chonnaq can strike the killing blow, it itself is attacked. The attacker hails the Enterprise revealing it to be another Enterprise commanded by Jane Tiberia Kirk. 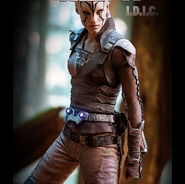 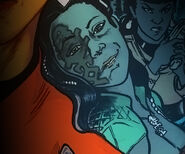 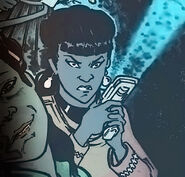 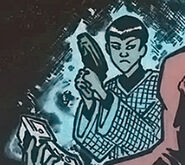 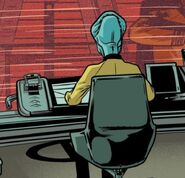 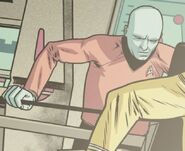