The Original Series: Boldly Go No. 14

29 November 2017
Boldly Go, Issue 14 is the fourteenth issue of IDW Publishing's Boldly Go series of comics set in the Kelvin timeline. It is also the second part of the IDIC miniseries.

Previously in STAR TREK: BOLDLY GO...
In an alternate timeline, James T. Kirk was captured as a baby and raised by Klingons. Now known as "The Orphan," he pursues his nemesis: half-Vulcan half-Human Starfleet officer Simon Grayson, who serves aboard the Enterprise under Captain Christopher Pike. Grayson has rejected his Vulcan heritage (and trimmed his ears).But just when it looks like the Orphan will be triumphant, a rip in space-time brings even more alternate timelines into focus...

Captain Jane Tiberia Kirk has lived her life by one principle "Anything is possible". A statement that has never been truer than right now given the multiversal collection of Enterprises before her. Spock deduces that they are caught in another quantum storm before Nnamdi Uhuro reports they are being hailed by the USS Endeavour, now commanded by the familiar face of James T. Kirk. The reunion is interrupted however when Darwin detects a Klingon vessel attacking another Enterprise. Aboard the IKS Chonnaq, The Orphan is ready to strike the killing blow before his craft is disabled by an electrical attack fired by a version of the Enterprise populated entirely by androids. All of a sudden the quantum energy surges and crewmembers are beamed off each ship.

Jane Kirk comes to in a rocky, desert to find Doctor Leonard McCoy and an android version of Nyota Uhura. Before they can properly gather their wits however, a Vulcan spacecraft lands and Spock exits. Much to the surprise of the three, this is not New Vulcan. In this timeline, Nero destroyed Earth and they stand on the original Vulcan.

James Kirk comes to on in a forest with the android version of Hikaru Sulu before the two are attacked by Simon Grayson, who is convinced Kirk is The Orphan. Kirk and Sulu both attempt to peacefully deescalate the situation before Simon is simply stunned from behind by Pavlovna Chekov. After placing herself under Kirk's command, Pavela leads Kirk and Sulu to a large Indian-styled city. The three begin trekking down to it unaware that they are being watched by security cameras. Intrigued, the empress orders them brought to her...the scion of the great House of Khan! 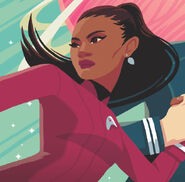 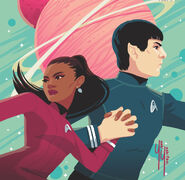 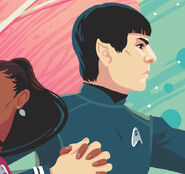