The Original Series; Boldly Go No. 16

Boldly Go Issue 16 is the sixteenth issue of IDW Publishing's Boldly Go series of comics set in the Kelvin timeline. It is also the fourth part of IDIC miniseries.

"I.D.I.C." Part 4 of 6! The epic voyage through the Star Trek multiverse continues, as the villain behind it all is revealed... and their vendetta against Captain Kirk threatens to end all realities!

Previously in STAR TREK: BOLDLY GO
An unknown force has caused realities to collide. Captain Kirks and Starfleet crews from across infinite dimensions have been thrown together in alternate timelines. Working together to discover how and why the impossible is happening, they face dangers they could never have imagined...

James T. Kirk, Jane Tiberia Kirk and their botanical counterpart are but three versions of a single being reflected through infinity. If a human were to see every Kirk at once, their synapses would burn out. But for the moment, the narrator is privy to allow the human audience a taste of omniscience and see three destinies unfold at once.

Note: All three plots of this story occur simultaneously, they are summarized separately here for ease of reading.

On the Augment ruled Earth, James T. Kirk hangs in his cell before he is freed by the android Sulu who escaped by killing his guards before he leads Kirk to where Pavlovna Chekov is being held. When the two arrive however, they find their path barred by Augments before Pavela, who has already hacked through her cell's security, guns them down from behind. As the three compare notes they are approached by Simon Grayson who is now willing to speak rationally. Despite their differences, Grayson is still a Starfleet officer and thus cannot leave innocents behind before he leads them to the exits. The quartet come to a shuttle before Grayson seizes Pavela's weapon and renders her unconscious before Sulu is impaled from behind. Grayson, as it turns out, has bargained with Khan. Levelling a weapon at Kirk, he reminds that man that he has embraced his Human heritage. And Humans, unlike Vulcans, lie.

On Vulcan, the Narada fires at the capital city, devastating it. Spock insists that they have no hope in combat and makes ready an evacuation to regroup with the Federation at Andor. The displaced trio have no intention of fleeing however. Nero fell in each of their realities and they are confident they can fell him here. The problem is that only the Jellyfish has the destructive payload necessary and it is likely stored aboard the Narada. The android Uhura leads Jane Kirk and Leonard McCoy to a nearby transporter and the three materialize in the Narada where Uhura guns down a crewman. After Kirk and McCoy arm themselves, the three make their way to the craft's bridge only to be greeted by Valas. Nero then makes himself known by impaling Uhura before McCoy is restrained by the guards. After Nero comments on how Jane Kirk reminds him of James, Kirk and Valas find themselves at a standstill.

On Risa, the botanical Kirk is enjoying the company of two women before Nnamdi Uhuro and the gaseous Scotty attempt to remind him of the seriousness of the situation but the captain is immovable. As the two walk away, they can only comment that something does not feel right. Meeting up with Spock, the captain reveals she has found a potential way to contact the Starfleet native to this reality in the hopes of finding a possible solution to the problem. After Uhuro sardonically remarks that Kirk seems under a magic spell, Scotty reveals the planet is soaked in an assortment of powerful pheromones secreted by various species to the extent that three people having a normal conversation is a miracle. Elsewhere, Kirk has been brought to a private chamber before a shadowy figure enters. The figure dismisses the women, having only ever been a prostitute hired to distract Kirk, before he reveals himself as The Orphan holding a lighter. Scotty returns to try and find Kirk only for the captain to come running out his room ablaze much to the horror of the capsule-less Scott. 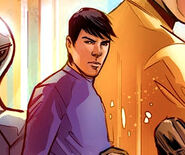 Retrieved from "https://memory-beta.fandom.com/wiki/IDIC,_Part_4?oldid=664796"
Community content is available under CC-BY-SA unless otherwise noted.