The Original Series (IDW ongoing) No. 24

Captain's Personal Log, Stardate 2260.115
I had the nightmare again. The one with the scales. The click of giant claws against cold floors. The hiss of an angry animal as it tries to kill me. Again. They don't teach you this at the academy. They tell you that you're going to see unimaginable things out there, but they don't tell you what it does to your dreams.

The Enterprise arrives at Parthenon 559 having answered to a distress call from the settlement. Kirk, Sulu, Zahra, and Kai beam down to the planet and find out that the majority of the colonists are dead. They find a Starfleet officer named Henderson. Zahra finds other survivors. All the survivors are evacuated to the Enterprise. There are Gorn on the planet, and Henderson wants them dead. Kirk is wondering why there are Gorn on the planet. Kirk beams down with a landing party equipped with universal translators that can translate the Gorn language. Kirk and his landing party are attacked by the Gorn and captured. The Gorn on the planet reveal that they were rebels who came with the Gorn that invaded New Vulcan just to escape from them. The leader then reveals that they were attacked by the Human colonists, and that is why they killed most of them. Spock confirms this, having seen a video about the colonists attacking the Gorn. These Gorn are peaceful. Kirk decides that the planet belongs to the Gorn.

Henderson is furious when he hears that the Gorn will be getting the planet. Kirk explains that he does want any more bloodshed from either side. He also admits that he does not know everything about commanding a starship. Kirk and Spock are worried that the former colonists might force the Federation to return to Parthenon. Kirk will not let that happen.

base camp • Earth • the galaxy • Parthenon 559
Referenced only
San Francisco 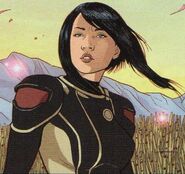 Retrieved from "https://memory-beta.fandom.com/wiki/IDW_Star_Trek,_Issue_24?oldid=663184"
Community content is available under CC-BY-SA unless otherwise noted.