Note: This story is told non-linearly. It is summarized chronologically here for ease of reading.

2258, San Francisco. Nyota Uhura tells Spock of an unusual signal she detected in the long-range sensor lab and her idea of requesting usage of communication equipment on Mars to better track the signal. Spock however has a rather different conversation subject. He feels that their differing posts in Starfleet makes their relationship inappropriate and warrants unwanted speculation. Uhura coldly says that if Spock feels that way he is free to take his leave. As she settles for a meal alone, an alien female "Jackie" storms past, communicating with her friend about her failed date with a "lying, misogynistic, narcissist with dreamy blue eyes" and how she is done dating humans. On cue, James T. Kirk follows explaining that he naturally talks like that telling Jackie to ask anyone who knows him such as... Uhura... who is a terrible example if he thinks about it. Sitting down in Spock's chair, Kirk's charm fails on Uhura even after he apologized for the bar fight when they first met (or at least he intended to apologize). He offers to take her to a nearby bar but she walks off to the long-range sensor lab. Late at night, a classmate pulls away Uhura from a terminal before the latter detects a faint transmission and the word "Slayton". The next morning, Spock wraps up his class but notices Uhura in the room. She is not here to see him however. She wants to speak to Cadet Pavel Chekov. Chekov is able to dechipher more about Uhura's mysterious signal and, though he cannot offer precise galactic coordinates, narrows it down to emanating from Wagner-219.

Uhura attempts to learn more about Wagner-219, discovering it is in fact a star system. When she puts in a data request however, she is denied access.

Cadet log, supplemental
Adopting a starfleet officer's custom of maintaining a personal log has proven beneficial to my studies here at the Academy. I was surprised to discover that it is not a common practice among the cadets. It is just another example as to why I prefer an atmosphere that cultivates learning instead of civil pleasantries. I am convinced now more than ever… …That I am making the correct decision today.

2261, Starfleet Academy. Cadet T'Laan despairs at the emotional and frivolous atmosphere of the campus as she walks to Professor Trumble's office. Though the Tellarite attempts polite conversation, T'Laan gets right to the point. She wants to transfer out of the academy and rejoin her people on New Vulcan. Trumble launches into a story of his own time at the Academy. In his day, he was the only Tellarite on campus but soon made a name for himself playing Parrises squares. T'Laan fails to see how this bears relevance to her situation. Trumble explains that the Inter-Academy Exploratory Competition is just around the corner and he wants T'Laan on the Starfleet Academy team. Though appreciative of the offer, T'Laan's intent is to leave the Academy. Not represent it. Trumble makes her a deal. Win or lose, he will assure her transfer. But...the young Vulcan just might find a reason to stick around.

Cadet's log, supplemental.
At Professor Trumble's request, I have agreed to represent the academy in this year's centennial competition. To commemorate the occasion, Starfleet is hoding a reception for all visiting delegates and participants. Attendance is unfortunately mandatory. Despite my previous reservations, it is only logical to cultivate personal interactions with the cadets I will be working with on the team. On a personal note, I have learned that the New Vulcan colony has sent a delegation to participate. I would be remiss if I didn't admit I'm looking forward to seeing some familiar faces.

2261. T'Laan enters the auditorium where she will meet her teammates. Before doing so however, she seeks out the delegation from New Vulcan only for their leader, Diak, to greet her with contempt for staying safe on Earth instead of helping on New Vulcan. The terse reunion is witnessed by Lucia Gonzales and Shev Akria, two members of the Starfleet team with T'Laan quickly butting heads with the Andorian. The other two members, Vel K'Bentayr and Grace Chen, then introduce themselves. Trumble praises that they are already bantering (the hallmark of any good team) before saying that, in spite of the "friendly competition", points matter. How the cadets place will reflect on their postings in the future. His advice is to watch out for the Vulcan team who have the physical and mental advantage. An admiral then gives a speech, recapping how Starfleet Academy was founded in honour of the lost starship Slayton and to ensure future explorers are prepared for the harshness of the unknown. And this contest is to encourage cooperation between species and build a future where, together, they will all travel to places no one has gone before. 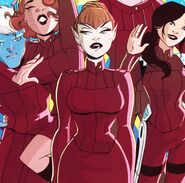 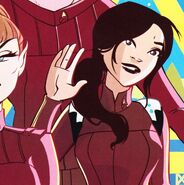 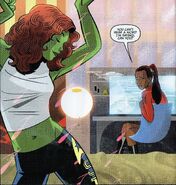 Trumble and his fellow Fighting Phoenixes 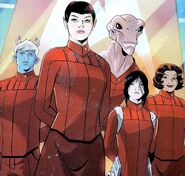 Jackie
Add a photo to this gallery

Subscription Cover by Jen Bartel
Add a photo to this gallery

Retrieved from "https://memory-beta.fandom.com/wiki/IDW_Starfleet_Academy,_Issue_1?oldid=689924"
Community content is available under CC-BY-SA unless otherwise noted.