What is the mystery at the heart of Starfleet that connects this new crew to Kirk, Spock and rest of the iconic cast? The answers are inside, in this all-new adventure set in the new film universe.

PREVIOUSLY in STARFLEET ACADEMY...
In the year 2258, Cadet Uhura discovers a unusual audio signal from deep space. With Cadet Chekov's help she locates the signal's origin in system Wagner-219, but finds all Starfleet records about the system are classified!
Three years later, Cadet T'Laan is prepared to leave the Academy, feeling out of places as a Vulcan. Professor Trumble convinces her to take part in the upcoming Centennial Competition, joining a team of fellow Cadets in a series of tests against students from across the Federation.

Note: This story is told non-linearly. It is summarized chronologically here for ease of reading.

2258. In the cafeteria at Starfleet Academy, Nyota Uhura talks to Pavel Chekov about her findings regarding Wagner-219, a system bursting with subspace anomalies. Uhura is convinced that the ban relates to more than just rough seas but Chekov is unwilling to risk his future over the mystery. Sympathetic, though disappointed, Uhura thanks him for his aid. What Uhura needs now is someone "with a blatant disregard for authority and the ego the size of-", as if on cue, Uhura invites the passing James T. Kirk to join her, claiming to need his help.

Meeting Kirk during his exercise routine, Uhura explains her problem and Kirk is eager to help solve the mystery. When Uhura asks how he plans to break in, he answers that they'll just walk right up to the archive vault and run their search there. Though Kirk's thickheadedness drives him forward, he is curious as to what drives Uhura forward, not buying that it's due to simple morality. Conceding, Uhura answers that no one's last words should go unheard. She learn that the hard way.

Kirk leads Uhura to the archive vault, under the pretense of looking at Klingon biological samples (a friend of Kirk's took part in a Klingon autopsy some months back) via McCoy's credentials. After Uhura convinces the clerk that they speak Klingonese, they are escorted to a terminal and gruffly told not to leave the room under any circumstances. Which they do the second the guard leaves. In the hall, the two briefly discuss Uhura's love life before Kirk directs her to find an open room in the restricted vault. No sooner have the two begun to search does a voice call out to Uhura.

2261. The Academy Centennial Games consist of five challenges, each skill essential to any future Starfleet officer. The first challenge is marksmanship, where Shev Akria puts his skills to use. As the other four watch, Grace Chen asks about Vel's odd habit of narrating literally everything. Chiming in Lucia explains that Monchezkins communicate via an electro-chemical hivemind so the whole "talking" thing is new to him. But he's not telepathic so any dirty thoughts are safe.

In the simulator, Shev shoots his way through the competition until only he and fellow Andorian Dreva remain. But in his overconfidence, Shev has neglected one fact that Dreva exploits. The walls are photon reflective, her perfect shot eliminating Shev and securing victory for Andor. As his teammates discuss how Shev's disapproving father will view the lose, Lucia puts her foot in her mouth when she off-handedly refers to T'Laan's (now deceased) family.

The next two challenges pass much better with Grace and Lucia scoring first place in piloting and trivia respectively (the latter by a significant margin). The final two events will not be held until tomorrow... so in the meantime, maybe they should just head to the party... a type of event not enjoyed on Vulcan. After enduring a Rigelian's flirtations, T'Laan excuses herself, preferring to devote her time to competition prep.

As the other three watch Vel absolutely own the dance floor, they ponder where their Vulcan teammate has snuck off to. T'Laan has found refuge in the deep space sensor lab, using its computers to help her plan out the best route for the scavenger hunt that will end the competition. The map takes them near Wagner-219, a quarantined system. Accessing audio logs relating to the system, T'Laan listens to one left by Nyota Uhura who hypothesizes the travel ban is covering something up. 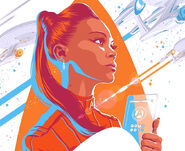 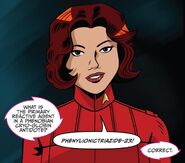