20:27.3
The Enterprise crew is locked on a deep freeze planet doomed to disappear into space! — "Ice Journey" was the 27th issue of Gold Key Comics' 1967 series of Star Trek comics. It was the 25th story illustrated by Alberto Giolitti and the third of five written by John Warner.

The USS Enterprise was assigned to conduct a population survey of the Federation member planet Floe I. Privately, Spock wonders if there might be something unusual about the mission which wasn't told to them, as the planet is facing glaciation. James T. Kirk, Spock, and Dr. Krisp suit up with anti-freeze uniforms and beam down, meeting Delegates Amara and Sunaro who are encased in protective carapaces for warmth. The Floes shed the shells as they prepare to slide down chutes into a subterranean city. But Spock and Krisp question how these evolutionary changes happened so quickly and whether they affected everyone, and this strikes a nerve. Amara and Sunaro arrest the Starfleet officers. At gunpoint, Kirk is forced to have Nyota Uhura transport down and help falsify their report.

Captain's log, stardate 20:27.5
Lieutenant Uhura and I are being held prisoners by the two leaders of Floe I — Dr. Krisp and Mr. Spock have vanished! It is clear that Amara and Sunaro intend to do away with the crew and me as soon as Lieutenant Uhura writes a false report about their mad society to the Federation... My only hope is that we manage to fool these tyrants and come out alive... I have lost all communication with the Enterprise!

Red-skinned Floe scientists developed a serum to speed-up mutations and survive the cold, but left their enslaved blue-skinned Floes to suffer. Spock and Krisp are deposited in a torture chamber for rebels, who help them escape in exchange for aid. They confront Amara and Sunaro, and the reunited landing party locates the serum manufacturing facility. Krisp keeps her word and tells the blue workers where the rebels are being held. Before Kirk can start distributing the serum to everyone, workers rise up in rebellion.

Kirk orders the landing party to return to the Enterprise. When Montgomery Scott asks how they could leave the Floes in the midst of civil war, acting as though life will go on, Spock explains that the blue Floes are aware that they will freeze to death within days and have lost hope. Kirk says the Floes could have been relocated to another planet, if they'd asked when there was time to arrange it, but the red Floes chose their elitism and slavery over survival.

Extinction from increasing cold was also featured in:

Genetic adaptation to climate change was also featured in:

Revolution for social equality was also featured in: 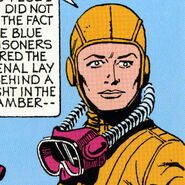 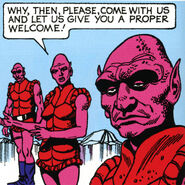 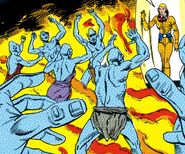 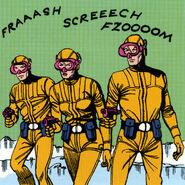 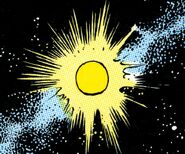