The Original Series No. 60

2274
Ice Trap is a Star Trek: The Original Series novel by L.A. Graf. Ice Trap was published in July 1992, the 60th book in Pocket Books' series of numbered TOS novels.

Sent to the icebound planet of Nordstral to investigate a mysterious outbreak of insanity, the crew of the USS Enterprise find themselves drawn into another, even deadlier mystery upon their arrival. A team of research scientists has disappeared on Nordtral's frozen wasteland, leaving no clue to their whereabouts, and no hint of their fate.

While Uhura and Chekov tackle the mystery surrounding the scientists' disappearance, Kirk and McCoy search for the truth behind the outbreak of mental illness. But both teams soon find themselves in danger, as the planet undergoes a series of massive earthquakes and electromagnetic disruptions. Unable to contact the USS Enterprise, both teams must fight for their lives as they try to solve the mystery of Nordstral—before the world tears itself apart!

The Enterprise is dispatched to Nordstral, a planet from which Nordstral Pharmaceuticals are harvesting a plankton-like substance, magnetic biota. A shuttle crew have gone missing and there are also outbreaks of insanity among the staff.

Kirk and McCoy accompany a ship's crew into the ice in an attempt to get to the bottom of the mystery. However, their efforts are hampered by icequakes, caused by the planet's magnetic poles becoming unstable and constantly reversing, and also by the ship's doctor, Muhanti, who has been afflicted by the insanity.

Chekov and Uhura take a security team to try and rescue the missing scientists but the head of Nordstral, Steno, heads out with his own team and native guides, only for a group of the native Kitka led by self-proclaimed shaman Alion to slaughter them as they did the first shuttle crew. The Kitka throw themselves into the water when they are dying to feed krakens and Alion has been doing the same to humans, despite them not containing the nutrients the krakens need, as part of a plan to use their technology to gain power for himself. However, he is eaten by a kraken while trying to kill Chekov. 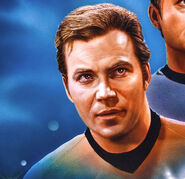 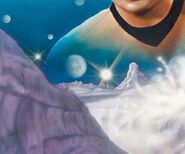