Captain's log, stardate 9219.7
Minutes ago, this landing crew and myself were safe aboard one of the United Federation of Planets's more decorated vessels—but now...

Captain Edward Fields of the USS Cluster is pinned down by disruptor fire from Romulans on a planet in sector 9. Members of his team lay dead around him, with additional crewmembers being struck down. He calls out to Keller, who dies from a blast. Another crewmember reports that Spithogiannis has also fallen, and is then hit herself. Fields is left alone, and uses his communicator to call the starship.

Fields's signal reaches the Cluster's bridge, under the command of Cadet-Commander Ronald Penn. Upon hearing of the deaths of all the senior officers, Penn recommends retaliatory action against the Romulans. Fields, knowing that only cadets remain aboard his vessel, dismisses that suggestion and orders Penn to retreat with deflector shields up.

Penn immediately disregards Fields's orders and initiates a hastily conceived rescue plan. Penn keeps the shields down and locked onto Fields's signal, ordering an immediate transporter beam-out. Unfortunately, Romulan Commander Lazar has already set his gun sight on Fields and fires. By the time materialization is complete, the transporter crew on the Cluster reports that Captain Fields was dead on arrival.

Penn, infuriated at the Romulans' audacity, announces to the crew that he is the new commander of the vessel, and announces the they will be disobeying Fields's last orders and pursuing the Romulans. Penn also states that he is taking those actions because they are what James T. Kirk would have done in a similar instance. When Communications Officer Ventura reminds Penn of Fields's orders, Penn threatens disloyalty among any of the crew with immediate court martial. Frightened, Ventura signals an incomplete transcript of the days events to any nearby Federation ships.

Nearby, the USS Enterprise-A has recently left the starbase at Christophi IX . Nyota Uhura reports the receipt of the signal Ventura sent, without being able to report an accurate nature of the situation because of the haste necessitating that Ventura could only send a few short phrases.

Captain's log, stardate 9222.3
Sending the Cluster towards Christophi IX for routine reports and the like, the Enterprise turns and heads deeper into the mysterious depths of the unknown, forever exploring and investigating the far corners of the universe—forever learning about ourselves. Sometimes learning things we'd rather not. 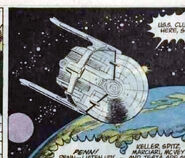 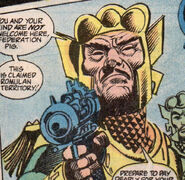 Penn and the bridge crew.

Fields, dead, on the transporter pad. 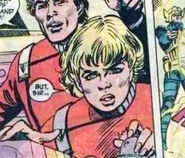 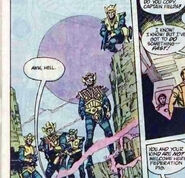 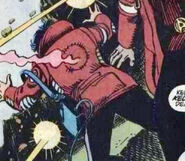 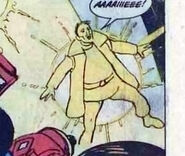