"Everyday is a good day to die." - Imperial Marines motto.

The Imperial Marines were a military unit within the Klingon Empire.

This organization was similar to the United Federation of Planets ground forces with the biggest difference with its Starfleet counterpart was that the Imperial Marines were an integral part of the crew of all large combat vessels. As such, the Klingons were capable of fighting a ground side battle without having to call in special vessels equipped for transport of troops.

Onboard the larger ships, the Marines were organized into battalions which seemed to be primarily independently commanded units. When situations demanded for larger actions, the Klingons often grouped together several battalions into regiments or brigade sized units. In matters involving long term occupation, the Klingons often brought in less well trained units in order to free the Imperial Marines for more important duties. Starfleet drew this conclusion from the fact that when supporting combat vessels left an area, they took their battalion of Imperial Marines with them.

Ground force tactics were quite simple which involved beaming in as many troops into an area as possible without any regard to losses sustained by signal jamming. They typically beamed directly into the target area where the objective was quickly secured and used as a base of operations by the Imperial Marines which began working outward. Though this appeared suicidal, they were somewhat effective in a crude sort of way. (FASA RPG module: The Klingons)(FASA RPG module: The Klingons: Game Operation Manual) 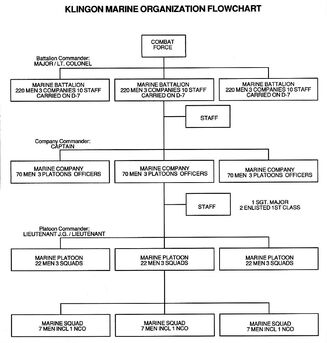