In Memory Yet Green...

In Memory Yet Green...

Captain's log, Stardate 44375.7 : We have arrived at Starbase 42 to pick up the gentleman who is to be the guest of honor at the 100th anniversary celebrations of Modala. It is Federation record that the Enterprise, NCC-1701, commanded by James T. Kirk, was instrumental a century ago in helping an oppressed faction of the planet's populace find the strength to throw off the shackles of their oppressors... ...Once that burden was overcome, a golden age of prosperity ensued on Modala, leading to their present wealthy and flourishing way of life. Although the original Enterprise crew is long since gone, the Modalan government has requested the presence of the starship currently bearing that proud name... ...As well as the attendance of any of the original four crew members known to be involved in that great time in Modalan history. Of those four, who have gone down in Modalan history books as heroes... ... Only one was available. However, Admiral Leonard McCoy's status is certainly legendary enough... Even to non-Modalans... That we can all consider ourselves singulary honored by his presence. 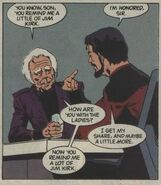