"In Thy Image" was the pilot episode script for the abortive development of the television series Star Trek: Phase II. The episode went unproduced, and the script was heavily rewritten to become Star Trek: The Motion Picture. The original version of the story did eventually find publication, as the complete script was reprinted in the reference work Phase II: The Lost Series.

In this story, in the Phase II continuity, V'Ger and its probe Tasha made different choices while returning to Earth in search of its creator.

Script introduction, Phase II: The Lost Series
We are exceedingly grateful to Harold Livingston for allowing us to share what is usually an intermediate stage of the writing process, intended only for the eyes of coworkers and other professionals. But for all that this might have been a work-in-progress when it left Mr. Livingston's typewriter, so much of what Star Trek would become is on these pages...

A reunion between Admiral James T. Kirk and retired Doctor Leonard McCoy at a park in San Francisco is cut short when Kirk is recalled to Starfleet Headquarters for an emergency meeting. Joining through holographic technology, Captain Lebutu reports the destruction of three Klingon cruisers by a massive vessel headed for Earth. USS Aswan is diverted to intercept, and Starfleet hastily readies the refitted USS Enterprise to assist. Willard Decker, Xon and Pavel Chekov are reassigned, and McCoy "drafted". Kirk is assigned as its commanding officer, and Heihachiro Nogura officiates a brief recommissioning ceremony.

En route, the Enterprise suddenly finds itself unable to avoid an asteroid. Xon had deactivated helm, deflectors, sensors and phasers in order to reprogram and familiarize himself with the systems. Chekov hastily arms a photon torpedo and destroys the asteroid. Xon apologizes, having computed high odds against such an emergency, and assures Kirk that he will make fewer mistakes in the future.

Captain's log, stardate 7420.1. Light cruiser USS Aswan is gone... obliterated by a weapon we were unable to identify or understand. We also know nothing of whatever it is that used that weapon. Our forward sensor scans are being absorbed by whatever object it is that we are now about to intercept.

At battle stations with shields up, the Enterprise approaches the 70-kilometer-long vessel at warp six. They launch a probe, but it is destroyed, then phaser-like weapons and a tractor beam strike the Enterprise. Xon discovers that the alien vessel responds to their initial hails as if the Enterprise was alive. When Kirk allows Xon to transmit back at the same frequency, the vessel ceases fire. It then downloads starship schematics from the main computer, but nothing about the crew.

Captain's log, stardate 7421.6. For an entire day now, we have been locked in the alien's tractor beam, being carried with it toward Earth. We have been unable to establish further communications with our gigantic captor and are unable to determine its intentions toward planet Earth. With our engines shut down, engineering is rushing the repair of damage suffered in the attack. Casualties have been heavy, but with no fatalities, thanks to the skills of Doctors McCoy and Chapel.

Groups of hovering egg-shaped probes materialize throughout the ship, as well as a different probe that walks on spindly legs and squeaks. Xon disassembles one of the hovering probes, finding sophisticated technology made of liquid hydrogen and controlled force fields. After probes try to break into the computer library, and requests to stop are ignored, Chekov and others try to stop them with phasers. The floating probes dematerialize, but the walking probe emerges on the bridge. Its squealing is translated by Nyota Uhura as requests, then demands, to talk to the Enterprise. Chekov names it Tasha after one of his relatives. When Uhura translates Kirk's reply that he is in command, the response is a denial — humans are parasites. Transmitted via the computer as if he was the ship, Kirk asks why the probes attacked and why the vessel is headed for Earth. It says it attacked because the Enterprise is infested with 430 parasites, and reveals Earth is "The Holy Home of the Creator". Then, discovering Kirk's deception, it starts downloading more files. To prevent it from learning about Starfleet and the Federation, Xon smashes the computer, getting electrocuted in the process. As Ilia reaches to help him, she and Tasha dematerialize.

Captain's log, stardate 7421.7. We — and the alien — will reach Earth orbit in exactly two days... with us still helplessly imprisoned in his tractor beam. The irony of all, of course, is that by cutting off our computer, we have also cut off our only means of communicating with the alien... so that we are unable to ascertain the fate of Lieutenant Ilia — and, more important, the purpose of the alien's visit to Earth. Our only clue is his statement that Earth is "The Holy Home of the Creator." What Creator...?

Based on the files it downloaded, Xon believes that the alien vessel now considers Earth infested and might want to disinfect the planet. Xon recuperates in sickbay, and Kirk follows McCoy's advice to get some sleep. He awakes when his sonic shower activates and Ilia appears within. But it isn't Ilia. She explains that she was Tasha, reformed by V'Ger into the likeness of Ilia to better communicate with humans. Kirk updates Starfleet with a brief, hi-speed subspace transmission. Tasha asks why he did that. Kirk explains that the planet needs to be informed of V'Ger's arrival. V'Ger releases the tractor beam as an act of faith and offers to show Kirk proof that Earth is the home of the creator.

Kirk, Xon and Tasha beam to a set of coordinates within V'Ger, inside a massive technological cavern. They find Ilia suspended in a stasis field. Nearby they see pieces of a 20th century space probe growing out of the walls — Voyager 18, which had disappeared into a black hole. When they read NASA's ID plaque, Tasha muttered "Glory to Nasa". Kirk tries to explain that humans built Voyager, but gets struck by lightning.

Captain's log, stardate 7421.6. In three hours we enter Earth's orbit. The giant starship V'Ger or Voyager, is five hours behind us, having allowed us that time to prepare "higher life forms" for its arrival... and, apparently, the destruction of "lesser life forms". Although the presence of the android Tasha/Ilia is for the clear purpose of providing V'Ger a constant flow of information about us... we dare not obstruct her for fear of provoking V'Ger into an immediate and catastrophic attack on Earth... Tasha/Ilia has, however, been of considerable assistance on helping us compile and correlate facts pertaining to V'Ger. Between her and Mr. Xon, who had repaired our main computer, a fascinating yet perfectly credible hypothesis has been formed...

When the Enterprise enters orbit, it uses the USS Delphi as a transporter relay to beam Kirk and Tasha to the park in San Francisco. By exposing her to other humans, he tries to convince her that humans are living things who build machines. They then beam to Starfleet's Archives Building and show films made by NASA, but Tasha remains unconvinced. Meanwhile, V'Ger arrives in orbit and prepares neutron bombs to annihilate humanity.

Captain's log, stardate 7421.6. Supplemental, to concur with other logs previously ejected. First Officer Willard Decker in command. Our vessel is now in self-destruct mode, and we have additionally begun overloading our engines to create a matter-antimatter explosion... in less than four minutes, the alien's four neutron devices will destroy every living thing on Earth...

Tasha expresses regret that humans have to die. Kirk implores her to see that V'Ger is wrong. Emotionally wrought and compassionate, Tasha lies and tells V'Ger she accepts the proof. V'Ger disengages its bombs. Disappointed to learn that lower life forms are in fact its creator, and feeling it can learn nothing from them, V'Ger deactivates Tasha, returns Ilia, and departs the Sol system.

The Enterprise is ready for its next assignment. 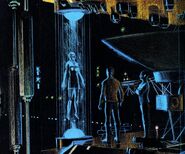 Inside V'Ger, Kirk and Xon discovered Ilia in a stasis field.
Add a photo to this gallery

Retrieved from "https://memory-beta.fandom.com/wiki/In_Thy_Image?oldid=743376"
Community content is available under CC-BY-SA unless otherwise noted.