2268
"Inalienable Rights" is the fourth Star Trek: The Original Series manga story in the 2008 anthology Uchu (Universe), published by TokyoPop, written by Nathaniel Bowden, with art by Heidi Arnhold and shading by Dominic Prestera. In this story, the USS Enterprise detected a civilization's initial warp flight and initiated first contact procedures. But as the day progressed, something seemed not right about the planet's society.

Uchu back cover
Nathaniel Bowden brings us a society in which bureaucrats run wild.

Captain's Log, Supplemental.
Starfleet Command has authorized a first contact with the third planet in the Makon system following their first successful warp flight. As customary with this procedure, Mr. Scott has prepped a shuttle for the surface. A landing ship is preferable to the transporter. I've left First Officer Spock in command of the ship.

Sulu detected what Spock determined to be Makon III's inaugural warp flight. Following custom to meet with those responsible for a warp flight, Kirk, Scotty and McCoy followed the trail of the warp ship in the shuttlecraft Copernicus. Upon landing on the warp ship's runway, Kirk introduced himself, but was interrupted by the approach of President Wan'Brek of the Makon City States. He explained that it was not the place of the others to speak. Scotty asked to meet the engineers who built the warp ship, which puzzled the president, but nonetheless he invited the humans to dinner.

Captain’s log, Supplemental.
After moving the shuttle to a safe distance, away from the prying eyes of a more primitive culture, the away team has returned to the capital city of the Makon government. As we sit down to dinner I find myself pleased that our meeting has started well. And hope for continued success. Dr. McCoy has determined that, while not altogether appetizing, the dish is fit for human consumption.

The dinner didn't go well. The president was annoyed by Kirk's intent to meet with representatives from other governments on the planet. Since their government launched the warp ship, Wan'Brek expected an exclusive relationship. Cultural obstacles were discovered when the president expressed confusion that Kirk would share his table with McCoy, a doctor, and Scott, an engineer. One of the officials at the table revealed he was responsible for buying and selling personnel.

After adjourning, McCoy suggested in frustration that Makon would be a better ally for the Klingons. But Kirk noticed someone hiding in the bushes, someone he’d seen on the runway. She was Jeena, inventor of the warp reactor. Kirk decided to transport her aboard the Enterprise, but the beam-out was witnessed. An official reported to Wan'Brek that Kirk stole one of their thinkers. Wan'Brek ordered the rest of the thinkers rounded up.

On the ship, Jeena was given a tour. McCoy healed a head injury she'd suffered while escaping from the cell where she and fellow pilot Pipp had been held. Scotty and Jeena chatted about warp technology during a tour of the engine room. Jeena said educated people on Makon were treated as second-class citizens, and was impressed with the lack of discrimination shown on the ship.

Captain's log, Supplemental.
Following our less than cordial discussion last night, Mr. Spock advises we stick to the plan and contact the Mols in a timely fashion. But I feel it would be a failing as a good will ambassador to give up after a single meal. We will return Jeena to the surface with one last attempt at reasoning and diplomacy.

With four thinkers shackled and at gunpoint, Wan'Brek accused Kirk of stealing his property. Kirk said he was bringing back their guest. A fight ensured, but Wan'Brek ordered fighting to stop or all the thinkers would be killed. Drawing Kirk's phaser and holding him, Jeena said Wan'Brek wouldn't be so stupid as to kill Makon's greatest commodity. She said Kirk had the power to remove the thinkers from the planet so they could escape this oppression. Spock neck-pinched her. Before beaming back to the ship, Kirk gave Wan'Brek a lecture about the thinkers knowing they were the true power, the benefits of equality, and a suggestion Wan'Brek open communications with the Mols. They must learn to live with their neighbors before they would be able to join the galactic community. Spock concluded, "Perhaps warp drive is not the defining moment of a culture's enlightenment." 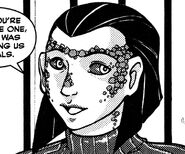 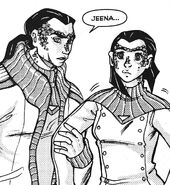 Pipp and Jeena, pilots and engineers. 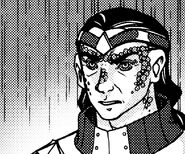 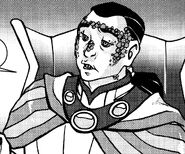 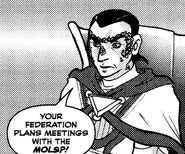 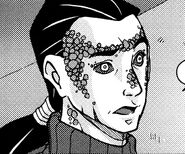 Jeena gets a tour of engineering. 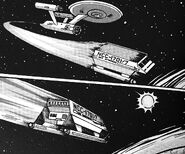