The most talented Starfleet engineers of two generations unite to solve a two-hundred-year-old technological mystery that turns out to be only the beginning of a wider quest.

With the support of Guinan and Nog, as well as the crew of the USS Challenger, Geordi La Forge and Montgomery Scott soon find themselves drawn into a larger, deadlier, and far more personal adventure. Helped by old friends and hindered by old enemies, their investigation will come to threaten everything they hold dear.

Seeking out the new, and going where no one has gone before, Geordi, Scotty, and Guinan find that their pasts are very much of the present, and must determine whether any sufficiently advanced technology is really indistinguishable from magic.

In 2161, shortly after the end of the Romulan War, the Intrepid is undergoing repairs to her hull in deep space when Captain Jason Lambert – on the hull in an EV suit overseeing repairs – observes a flare nearby. In the process of reporting a possible Romulan minefield to Starfleet, communications are abruptly cut off and no trace of the Intrepid is ever found.

In 2383, the USS Enterprise is exploring the Agni Cluster in order to locate potential colonies for the remaining refugees of the Borg Invasion two years earlier. But the crew is soon distracted by the discovery of the Intrepid NX-07, pocked by micrometeorites and aged, drifting in space. After the vessel is determined to be safe, Geordi La Forge and Jasminder Choudhury transport over to discovery a horrifying sight – the dissolved residual remains of the crew, victims of an apparent failure of the inertial dampeners. When Starfleet decides to send in the USS Challenger, Geordi is temporarily reassigned under its captain, Montgomery Scott. Soon Geordi learns Guinan will be joining him on the Challenger, along with a number of other familiar faces already assigned to the vessel, including: Nog, Leah Brahms, Reginald Barclay, Alyssa Ogawa, and a time-traveling thief the Enterprise apprehended fifteen years earlier, Berlinghoff Rasmussen.

Shortly after the destruction of the Intrepid, the 22nd century inventor, Berlinghoff Rasmussen (or B.R.) encounters the 26th century historian, Dominic Kent in Trenton, NJ. After following Kent for several days, Rasmussen breaks into his apartment – in order to determine if Kent stole an invention of his – only to discover evidence that Kent is from the future, including a small time-ship. After Rasmussen confronts Kent, the professor eventually acknowledges his origins but continues to be evasive with details about his time. Nevertheless, the two men fall into an unusual friendship. Having hidden the time-pod to prevent Kent’s escape, the professor asks Rasmussen to grant him access to obtain medication stored aboard – but when Rasmussen fears it is a ploy to escape, he refuses, and Kent dies.

When the Intrepid is underway, Rasmussen and Bok invite the Starfleet officers to continue working on the vessel – which Geordi accepts in hopes of finding some way to contact the Challenger. As Geordi and the others resume work, he tries to understand the agenda of the thieves and sow discord between Bok and Rasmussen. Meanwhile, on the Challenger, Nog uses his father’s authority to extract information from the thieves’ captured comrades, eventually leading the crew to realize that Bok is taking the Intrepid to the Split Infinite – the intersection of a cosmic string and a neutron star – in hopes of riding the string back in time. Onboard the Intrepid, Geordi learns the same terrifying truth and realizes that Rasmussen plans to take the Intrepid back to the 22nd century – while Bok makes a daring effort to save his son. In the process of preventing Bok from escaping into the past, the Challenger used the closed timelike curve of the Infinite to force the Intrepid further back in time until the Big Bang destroyed the vessel. In the final pitched struggle, Rasmussen escaped and Scotty was injured.

Shortly afterward, Dr. Ogawa informs Captain Scott that injuries sustained during the battle – coupled with his age – prevent him from meeting Starfleet fitness standards. Subsequently, Scotty chooses to retire from Starfleet, become a civilian specialist, and promotes Geordi La Forge to captain, giving him command of the Challenger. Meanwhile, the Tal Shiar obtain intelligence of Bok and Rasmussen’s efforts to travel through time and began researching their methods.

The investigation of the Intrepid leads Geordi to postulate that something akin to trans-slipstream is responsible for the vessel’s circumstances – and the data share peculiar similarities to telemetry transmitted by the USS Hera shortly before her disappearance, under the command of Geordi’s mother. This leads Geordi and the Challenger to investigate the trans-slipstream wake. Meanwhile, a sabotaged Romulan vessel carrying Sela, the chairman of the Tal Shiar, is forced into Federation space and rescued by the Challenger shortly before the Challenger is struck by an alien force. After bringing systems online, the crew find themselves outside the galactic barrier, and they soon discover the USS Hera floating in the void.

As the crew works to try and restore all of Challenger's systems, Sela plots to take control of the ship and suspects that Starfleet secretly controls the trans-slipstream technology. A series of bizarre readings leads Geordi to order an away team to the Hera, led by Scotty. The shuttle disappears en route, at the same time that strange alien vessels appear on the scene - the presumed trans-slipstream travelers. However, the away team soon wakes on an alien world, surrounded by evidence that the crew of the Hera survived and built a colony there. A number of even stranger occurrences leads Barclay and Scotty to propose that they occupy a toroidal continuum fold - a phenomenon which could explain why the Hera initially exhibited a mass far beyond its size.

The away team soon discovers fifty-seven survivors from the Hera, including the former first officer, Savar. The Vulcan explains the psycho-reactive nature of the living planet the team has crashed on, and explains the futility of attempting to travel back through the toroidal continuum fold to reach Challenger.

Meanwhile, on their side of the fold, the Challenger crew watches the alien vessels amass a small fleet before the Tomalak's Fist, the Romulan vessel searching for Sela, is displaced into the same area of space as the Challenger. When Guinan confesses memories of the alien vessels from her time in the Nexus, Sela stages a takeover of the Challenger but agrees to cooperate when Dr. Ogawa develops a way for Guinan to communicate with the aliens. The alien vessels are, in fact, alien lifeforms of immense size and power -- who express surprise and regret upon learning that their travels in the Milky Way Galaxy were harming its residents, and they agree to be more careful in the future.

Barclay and Scotty devise a method to communicate through the fold, which leads the Challenger to mount an ill-fated mission to open the toroidal continuum fold -- with the help of the Tomalak's Fist -- by widening the fold with a static warp bubble. After the entire complement of the Challenger is transported to the Tomalak's Fist, the former effects its widening of the fold, allowing the Romulan vessel to fly through to the rogue planetoid. The away team is transported up, but not before Geordi is able to finally say goodbye at his mother's grave. The living planet begins responding by launching "antibodies" to attack the Romulan ship. But after Dr. Ogawa informs the rescued Scotty that his organ failure may be irreversible, the ancient engineer chooses to lay his life on the line. After stealing away to the Challenger, Scotty holds the ship until the Tomalak's Fist travels back through the fold and destroys the Starfleet vessel to un-fold space and close the opening. But at the instant the ship implodes, Scotty is transported away -- unsure if he'll survive inside the toroidal continuum fold, but prepared for the possibility of death.

After the living trans-slipstream ships deliver the Tomalak's Fist back home, Sela delivers the Starfleet crew to the USS Enterprise. With the destruction of the Challenger, the crew prepares to go their separate ways, with Geordi returning to the Enterprise, retaining the rank of captain of engineering. Having began a romantic relationship during the assignment, Leah Brahms chooses to stay for a time with Geordi. A final occasion brings them together for the memorial service of Scotty, held aboard the Enterprise and attended by Spock, Sonya Gomez and other familiar faces.

2161
The Intrepid vanishes.
2365
Geordi becomes chief engineer. (19 years before the novel)
2384
The incident aboard the Challenger. 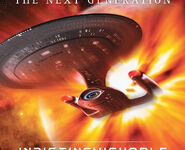