The second chapter of a bi-weekly Infestation tie-in! Admiral Kirk, Mr. Spock and Dr. McCoy fight for their lives against mobs of zombie colonists! Will they be able to prevent the Infestation from spreading throughout the Federation? And will they discover the greater threat behind the undead invasion in time to save themselves?!

INFESTATION UPDATE:
Traveling to Calibus with Kirk and Spock to recieve a humanitarian award, Dr. McCoy makes a startling discovery when they make planetfall-the entire world's population has been infected by a zombie virus! the search for a cure quickly escalates into a struggle for survival as the Enterprise veterans, holed up in an abandoned laboratory, are besieged on all sides!

Spock succeeds in opening the door before Kirk and McCoy have to kill any colonists. Kirk closes the door as the colonists try to force their way in, but Spock warns that it will not hold long. Searching the facility, the three men find a room full of vertical box-like computers, some with robotic arms. As Spock accesses the databanks of one, a face-like pattern of triangles appears on its screen. Stepping forward on mechanical legs and bowing, it introduces itself as Thirty-Seven, an "articulated artificial intelligence unit" created by Robert Williams. Thirty-Seven explains that the facility contains an independent power generator which it has kept running in hopes of attracting a rescue party.

Kirk and Spock ask for more information about the disease and Williams. Thirty-Seven tells them that Williams has spent years creating androids, but worried that they could not fit into human society. He came to Calibus VII hoping to create more human-like robots, and experimented with infusing human DNA into his robots' brains, without success. Then a mysterious woman named Britt arrived, claiming she was sent to help Williams, who seemed to fall under her spell. The robots they created "carried some sort of hybrid cybernetic-human infection", which rampaged through the colony's population but left Britt unaffected.

The colonists enter the building; Thirty-Seven leads Kirk, Spock and McCoy to Williams' lab, on the way showing them Williams himself, now infected with the virus and restrained by a force field. McCoy finds the data Britt gave Williams in the lab's computer. He believes he can reverse-engineer the virus. Some time later, Spock informs Kirk that Britt has been transmitting technological data into space, where the transmissions seem to vanish at a certain point. Kirk is distracted by the thought of Emigh, Barnes and Padilla, "relegated to this kind of existence, this kind of a fate beyond death, and yet denied any sort of true rest..." McCoy believes he has found a cure, a pink substance loaded into a needle gun. Thirty-Seven lowers the shield in front of Williams, and McCoy fires a needle from the device into Williams' chest. The drug begins to work, but McCoy does not know if Williams will ever look normal again. Thirty-Seven tells them that Britt periodically returns to the facility to check on technological devices she has set up, and is scheduled to be back soon. McCoy believes he can make an aerosol version of the drug that can be distributed through the atmosphere, and Spock suggests using Williams' equipment for satellite experiments to build rockets to launch the serum.

McCoy and Kirk prepare a huge vat of the bubbling pink serum, which Spock and Thirty-Seven load into small rockets. A group of colonists enters; McCoy fires the needle gun at them while Kirk and Spock fight them off with metal tools. A hole cracks open in the ceiling and Britt drops through. A curvaceous woman with sharply pointed canine teeth, Britt confronts Kirk, saying he cannot be allowed to stop her. Kirk suggests a "peaceful agreement", but Britt punches him, sending him flying across the room. Kirk strikes Britt with a wrench and breaks her neck, which she snaps back into place. Noticing what Spock is doing, Britt punches Kirk aside and heads for the Vulcan, but several of Thirty-Seven's fellow robots advance on her. She savagely pushes them aside, destroying them, but, as she nears Spock, Kirk fires several shots from the needle gun into her back. Britt leaps at Kirk, who is standing above the vat of serum. He continues firing into her chest, but she grabs and breaks the needle gun. Kirk flips her over him and into the serum, in which she appears to dissolve. The rockets launch and the antidote falls on the planet in the form of rain.

Some time later, Kirk, Spock and McCoy say farewell to Williams, Thirty-Seven and the colonists. Williams apologizes for helping Britt. McCoy has been unable to reverse the physical effects of the virus, which is only dormant, not eliminated from the infected individuals. Kirk declares General Order 7, quarantining the colonists as well as Emigh, Barnes and Padilla, whom McCoy promises he will keep working on a cure. Kirk says it was an honor to work with Thirty-Seven, telling Spock and McCoy that the robot was the most human creature they met on the colony.

23 February 2011
First published by IDW Publishing.
September 2011
Included in the omnibus Infestation, Volume 2 along with IDW's Ghostbusters and Zombies vs. Robots/CVO Infestation finale.
July 2014
Collected in the Infestation Omnibus along with all the IDW's Infestation crossover stories. 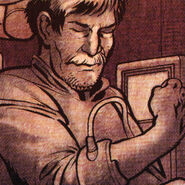 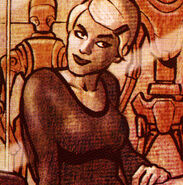 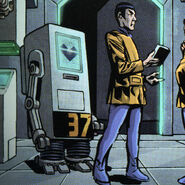 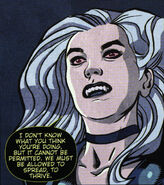