Interphase, Part One of Two

Starfleet Corps of Engineers No. 4

Have Tech, Will Travel

2376
Interphase, Part One was an eBook, the fourth installment of the Star Trek: Starfleet Corps of Engineers series, written by Dayton Ward & Kevin Dilmore and published in February 2001. In 2002, this story was reprinted in the paperback omnibus Have Tech, Will Travel.

More than a century ago, the USS Defiant disappeared with all hands into an interspatial rift deep in Tholian territory. Now the derelict ship has been seen drifting in and out of ordinary space, and the Tholian authorities have reluctantly agreed to let Starfleet retrieve the Defiant from the rift. Perhaps, at long last, the lost ship can be brought home and its valiant crew paid their final respects.

Captain David Gold and an SCE team from the USS da Vinci succeed in boarding the Defiant, but their investigation soon uncovers a dangerous secret. For more than a hundred years, an ancient super-weapon has been hidden away within the scarred and lifeless starship, along with evidence of a long-forgotten atrocity—evidence that could ignite a vast interstellar war!

German cover of Book One 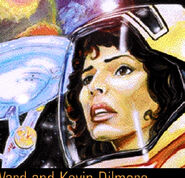 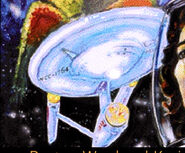