Hearts and Minds No. 3

"If the Klingon officials refuse to officially withdraw their declaration of war within the next ten hours… I am authorized to use military force against the Klingon ships in this quadrant… and Bajor."
—Skrain Dukat, 2370

"Into the Abyss" was the third issue of Malibu Comics' 1994 Hearts and Minds miniseries of DS9 comics. The issue consisted of 24 pages of story by Mark Altman. The art was penciled by Rob Davis and inked by Terry Pallot, with Mark Paniccia credited as editor.

Rom steps in Quark's quarters and finds him hiding behind his bed with a phaser. Quark asks if Rom spoke with Constable Odo. Rom tells him that Odo will be waiting for him at docking pylon C. Quark tells Rom to tell anyone who asks that he has gone on vacation and hurries off to meet Odo. There, Quark tells Odo the ordeal he is going through with Maura, and that he needs protection. Odo tells Quark that the plan is to sell her the bar, leaving Quark puzzled.

Commander Sisko's is having breakfast in his quarters when his son walks in. When Benjamin asks Jake what is wrong, Jake tells him that most of his friends are afraid of the expecting war between the Klingons and Cardassians. Sikso says that war as a good chance of happening when people start to strongly believe in it. He also reassures him by adding that there's always hope as long as both powers are still talking to each other, even if he finds the task frustrating when both sides won't listen to reason. Jake tosses a baseball that was on the table at his dad and tells him: "If they they're not chasing your fastball throw them your curve. It always works with me."

In Cargo bay 5 Chief O'Brien notices Odo walking in and quickly tells him that he has nothing new on the sabotage of Ambassador Berel's runabout—whoever perpetrated the sabotage covered their tracks perfectly. Odo says that the information could prove useful and asks O'Brien to keep him informed.

Aboard the Arvas, Maura is in her quarters speaking to Quark on her monitor. Quark finally tells her that he will sell the bar as gold pressed latinum sounds much better then death. When her communication is finished, she tells her companion to notify their friends that phase two was complet, she also needed him to prepare the Arvas to depart for the Gamma Quadrant.

Science officer's log stardate 47295.9
We are proceeding into the sector of the Gamma Quadrant known as the "Abyss. According to native superstition, all ships that traverse this area of space never return. Certainly the K'Tang didn't; It is my hope we discover why.

As the USS Orinoco travels at warp speed, Dax and Doctor Bashir discuss the natives' beliefs about the "Abyss". Bashir is rather skeptical, but Dax is not so quick to dismiss the theory. Koloth for his part is still strongly rooted to the idea that the Cardassians are responsible even if Dax points out that a Galor-class ship would not be a match for the IKS K'Tang. They note that sensors are not picking up anything, not even the usual neutrino emissions left over by a battle.

Koloth suggests entering the distress buoy time code into the computer along with the time the Klingon station on Gamma 7 picked up the buoy. Knowing that the buoy came from inside the Abyss, they triangulate the location of the buoy's launch site.

Dukat gives orders to his commanders aboard his ship: Commander Mavek will be responsible for the ground assault on Bajor and Getar and his men will occupy the station. Kotan Marok arrives in the conference room and interrupts pointing out that there will be no battle as long as he negotiates. Dukat shows him a PADD with a communique from Cardassian Central Command suspending all Civilian council authority and resumes the briefing.

Quark is alone at his bar drinking his last bottle of Aldebaran whiskey when Maura and Delgar walk in. They are surprised to find Quark ready to enjoy retirement and looking buy a condo on Risa. Before Quark signs the deed over he states his last conditions, that Maura keep Rom and the Dabo girls at double their salary. She accepts and Quark signs, as he leaves he asks her what she will call the bar. Maura notes that everything is going according to plan and gives Delgar the bottle of whiskey.

In cargo bay 4, Quark asks Morn to keep an eye on Maura, as he doesn't believe she is transporting standard EPS power grids for terraforming.

The Orinoco finds the debris of a Klingon ship. Dax confirms that it is the K'Tang and her tricorder picks up trace of residual plasma discharge from the ship phaser weapons. Koloth says that it is impossible as the K'Tang's weapons systems were sabotaged. Bashir jumps to the conclusion that it must have been the Cardassians then but Dax points out that Cardassians do not use plasma based weapons.

In the conference room on Deep Space 9, Captain Kol asks Dukat why he has brought more ships into the sector, Dukat explains that it is just roster relief for his men who cannot take leave on the station. Frustrated, Sisko states that if they want to go to war they might as well just do it but if they want the negotiations to continue all but their command ship must leave the sector. He storms out leaving the delegations surprised by his ultimatum. Sisko heads for his quarters and finds his son playing a new game called Khitomer Attack, and is immediately summoned to Ops. When he gets there, O'Brien tells him that Major Kira and Quark are waiting in his office.

Once there, Quark informs Sisko that Odo his aboard the Arvas, because he suspects Maura of being involved somehow with the destruction of Berel's runabout. He adds that she is not transporting what she claims, but rather Cardassian disruptors.

The Arvas is en route to Abyss at same time the Orinoco enters the planet's orbit. Sensors are picking up erratic readings due to the atmosphere being heavily ionized making it difficult for a positive sensor lock. Dax suggests that a landing party might have been sent to the surface. They decide to investigate the occurrence on site.

After a rough atmospheric entry the runabout lands in a clearing. When they step out, Bashir picks up life signs on his tricorder. From the top of a hill he sees a pyramid, in front of it it is the logo of the Romulan Star Empire. On the Promenade Kira congratulates Sisko on persuading both powers to remove their ships from the sector when O'Brien notifies Sisko of a subspace message from Captain Jackson of the USS Kerapledes, to inform him that he came across a fleet of Cardassian ships in the Mutara sector.

When Sisko confronts Dukat on his reinforcements and tells him that a fleet of 30 ships have been dispatched by Starfleet Command. Dukat doubts that the fleet will arrive any time soon and suggest he asks for the Cardassians' protection.

Back on Abyss, Dax, and Bashir suggest heading back into Federation space but Koloth would rather engage the Romulans. Before they can act, they find themselves surrounded by Romulans pointing disruptors at them. 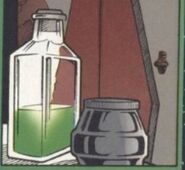 The Orinoco enters the atmosphere of Abyss. 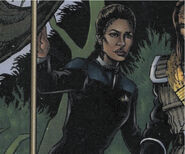