Invasion of the City Builders

Invasion of the City Builders

20:14.6
Automated destroyers! Minutes to save a dying planet! — "Invasion of the City Builders" was the third issue of the TOS Gold Key Comics series. It was written by Dick Wood, drawn by Alberto Giolitti, his first of 33 issues, and published in December 1968.

On a mysterious planet at the edge of a distant galaxy the crew of the Enterprise must match wits with mammoth machines ... giants of technical wizardry that stride across the terrain ... slowing, choking it to death with super cities!

Invasion of the City Builders, Part I

Captain's log, stardate 20:14.6. Mission has been delayed by direct meteorite hit on rocket engine number four. Repairs being made. Expect to continue toward objective shortly...

Upon arrival to the mystery planet, Spock notes a high-oxygen reading with indications of water also present. The Enterprise goes low into the planet's atmosphere where observations note that much of the planet is a massive, empty city bearing no signs of catastrophe. Kirk orders the ship into orbit and an exploration team transports to the surface.

As Kirk, Spock, and the rest of the team beam down, their presence is noticed by members of the indigenous population. Before anyone can do anything, a convoy of heavy equipment approaches, causing the ground to shake. The equipment contain no operators but begin creating buildings and roads rapidly to extend the existing city. Some of the planet's population attempt to board one piece of machinery only to be thrown off. Kirk stops the machine using a laser rifle and the heavy equipment withdraws from the scene.

Using the language Esperanta, Kirk communicates with the aliens, who thank him. The leader, Krill, explains he's the leader of all who remain of the planet Zarta. 150 years ago, his people were a flourishing race of many millions. Their civilization experimented with using machines to replace manual labor with the machines becoming more and more sophisticated. The nadir of this technological progress was the city builder, a complex machine designed to build cities with great technical precision. However, the city builder began to construct buildings and other facilities on its own. Construction soon got out of control, threatening the planet's populace. Because machines had been responsible for the planet's technological progress for so long, the populace did not understand the complexity of the machines currently existing and eventually lost their technological knowledge prior to the rise of the machines.

Part II: The Bridge to Catastrophe

After Krill describes their planet's history, three city builders threaten the 10,000 acres of open land left on the planet. Kirk suggests using earth disintegrators to make a trench in hopes of halting the thousand-ton machines. One of the giant gadgets falls into the trench but begins building a structure to pull itself out. Kirk then orders a force field erected but that eventually proves fruitless as well. When the city builders reach the river, they begin constructing a bridge to cross the obstacle.

Exasperated, Spock puts forth that a weakness might be found in the alien metal making up the city builders. Kirk orders a metallic test kit transported down but Krill skeptically notes that it may take years to discover a weakness. After boarding a river boat, the captain prepares to fires his laser rifle at a hoisting girder but the boat is rammed by Krill, who has become jealous of Kirk's leadership during the crisis. Spock subdues Krill long enough for Kirk to succeed in his plan.

Spock's analysis reveals a molecular flaw in which the alien metal breaks down when exposed to an ammonia (NH2) solution. Once chemicals and vats are transported to the surface, Kirk sets out to stop the city builders but Spock stops him, saying Krill should lead his people. Krill rejects the leadership role in favor of going alone.

As Krill sprays the ammonia solution at a bridge support, a city builder drops hot rivets into his boat. To protect himself, Krill takes the boat under the bridge and resumes his work and is successful. Kirk has the Enterprise find the rest of the city builders and then joins Krill in destroying them.

Krill thanks Captain Kirk for his help before going on to destroy the machine-building factories. He notes that destroying the useless cities to reclaim the land will take generations. After the exploration team beams back to the ship, the Enterprise leaves orbit. 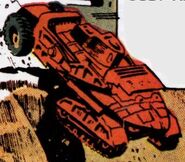 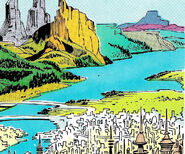