Jadzia Dax, born Jadzia Idaris in the year 2341 on the planet Trill, was a joined female Trill in the 24th century. She had one younger sister, Ziranne. Her father's name was Kela Idaris. Dax served as the science officer on Deep Space 9. (DS9 episode: "You Are Cordially Invited"; DS9 short story: "Reflections"; DS9 novel: Trill: Unjoined)

Jadzia knew from a very young age that she wanted to be joined, and worked all of her life towards that goal. To prove her value, she earned distinctions in exobiology, zoology, astrophysics, and exoarchaeology. (DS9 episode: "Dax"; ST video game: Starship Creator)

Jadzia studied under Professor Richard Galen while at the Academy. (TNG novel: The Best and the Brightest)

Jadzia was eventually joined with the Dax symbiont in early 2367, after the death of the previous host, Curzon. (DS9 episodes: "Emissary", "Facets")

During the time after Jadzia had been rejected from the initiate program, Setheleyis th'Rasdeth counseled her to reapply. (DS9 - Prophecy and Change short story: "The Devil You Know")

Shortly after her joining, Jadzia participated in an archaeological dig on the planet Pandora, where she encountered a powerful object called the Codex. (DS9 - Prophecy and Change short story: "Chiaroscuro")

On stardate 46910.1, the Klaestrons attempted to extradite Jadzia for the murder of Klaestron military leader Ardelon Tandro, a murder which was attributed to Curzon, as they believed that joined Trills were answerable to another host's crimes. When a hearing was later held on Deep Space 9, Sisko represented her, although it was the appearance of Enina Tandro, Tandro's widow, that revealed the truth and exonerated Jadzia and Curzon. (DS9 episode: "Dax")

In early 2370, Jadzia was disguised as a Bajoran Vedek to infiltrate a meeting of the Chamber of Ministers of the Republic of Bajor with Kira Nerys to tell them the Cardassians were supplying the Alliance for Global Unity with weapons. (DS9 episode: "The Siege")

In the summer of 2371, Jadzia helped her friend and fellow Trill Moll Enor when Moll was on trial for endangering her symbiont. (TNG novel: The Best and the Brightest)

At the end of 2371, Jadzia Dax was promoted to Lieutenant Commander. (DS9 episode & novelization: The Way of the Warrior)

In 2372, Jadzia returned to Trill when her sister Ziranne mysteriously turned up in a hospital joined to the Roa symbiont. This led Jadzia to a symbiont black market being run by Verad Kalon, an unjoined Trill who had stolen the Dax symbiont from Jadzia briefly in 2370. With the assistance of the Trill Symbiosis Commission, Jadzia found Verad and ended his operation. (DS9 short story: "Reflections") 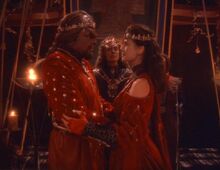 At the beginning of the Dominion War, Jadzia commanded the USS Defiant in a dangerous mission to destroy a Dominion sensor array in the Argolis Cluster. (DS9 episode: "Behind the Lines"; DS9 novelization: ...Sacrifice of Angels)

In 2374, she was married to Worf, son of Mogh, and inducted into the House of Martok. (DS9 episode: "You Are Cordially Invited")

Later that year, Dax was attached to Project Blue Sky, a scientifically orientated war research project conducted in conjunction with the Romulans. Jadzia and Romulan Subcommander T'Rul attempted to create an enzyme that was supposed to alter the genetic profile of the Jem'Hadar, without success. (DS9 short story: "The Devil You Know")

Jadzia was murdered in late 2374 by Skrain Dukat, with the assistance of a Pah-wraith. The Dax symbiont survived and was eventually rejoined with Ezri Tigan. Jadzia Idaris' body was returned to Trill and buried in Manev cemetery. (DS9 episode: "Tears of the Prophets"; DS9 - Worlds of DS9 novel: Trill: Unjoined)

Jadzia was a skilled Tongo player and won considerable amounts of money playing the game at Quark's. Unfortunately she was a less skilled wrestler and lost most of that money wrestling with Benjamin Sisko on weekends. (DS9 - Avatar novel: Avatar, Book One)

In an alternate timeline in which Captain Sisko became trapped in a subspace field in 2372, Jadzia was still alive in 2422. In that year, she assisted Jake Sisko in his failed attempt to rescue his father. She was still close friends with Julian Bashir. (DS9 episode: "The Visitor")

In another alternate timeline created by the USS Defiant being sent back in time to the 22nd century, the ship's crew, including Jadzia, settled on Gaia IV. She and Worf eventually married and had several children. By 2373, they had numerous descendants, including Yedrin Dax, Brota, and Lisa. (DS9 episode: "Children of Time")

In another alternate timeline in which the Cardassian Union did not withdraw from Bajor in 2369, Jadzia was the science officer of Starbase 375 in 2373. In that year, she was killed when the Dominion ship commanded by Taran'atar flew into the starbase's fusion core, leading to their mutual destruction. (TNG - Myriad Universes novel: A Gutted World)

In another alternate timeline where Khan Noonien Singh won the Eugenics Wars and forced the human race to undergo genetic engineering en-masse, Trill became a subject world of the Khanate of Earth. Like all of her hosts from Lela onwards, Jadzia was a member of the resistance, a medical helot onboard the battleship Phoenix. Miles O'Brien, future optio of the Defiance, was also serving onboard the Phoenix. O'Brien suffered an injury to his leg joint, and Jadzia remembered it and passed it along to her successor, Ezri. (DS9 - Myriad Universes novel: Seeds of Dissent)

Retrieved from "https://memory-beta.fandom.com/wiki/Jadzia_Dax?oldid=752647"
Community content is available under CC-BY-SA unless otherwise noted.