4623.4
Jeopardy at Jutterdon was a Star Trek: The Original Series coloring book/sticker book. It was published in 1979 by Whitman Publishing, the producer of Gold Key Comics.

Captain's log, stardate 4623.4 — The Enterprise is at warp 6 heading toward space station L-6, known as "Jutterdon". We will take on supplies and give shore leave to off-duty personnel.

Montgomery Scott transported Kirk, Spock and McCoy over to the space station. Immediately they were assaulted by strange creatures wearing Starfleet uniforms who put them in the station's brig. McCoy's medscanner showed that these creatures were actually Human. Soon the three officers were brought before Nebula and his wife Stellar, who had taken over the station. They'd mutated the station's personnel with the use of a machine.

Kirk and McCoy were strapped into this machine and mutated, with McCoy growing fangs and Kirk becoming hairier. Stellar ordered the creatures to attack them, but one of them slipped Kirk his communicator so they could beam back to the ship. In sickbay, as McCoy waited to be treated by a nurse, he lamented that this was one time he'd prefer to be a Vulcan. Once the antidote returned them to normal, they returned to the bridge. Spock reported three vessels were now chasing the Enterprise.

Captain's log, stardate 4623.5 — Nebula and Stellar have foolishly left Jutterdon with their crews and have attacked the Enterprise. Although their ships are easily maneuvered, they are no match for the Enterprise.

The ship's main phasers destroyed one spacecraft and immobilized the other two. Their crews were captured. While McCoy administered antidotes to station personnel, Commander Phobos thanked Kirk for getting his station back. Phobos said they all were granted an extra day of shore leave. 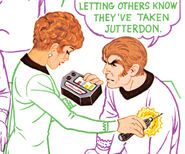 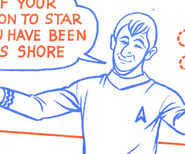 Phobos (Commander)
Add a photo to this gallery

Retrieved from "https://memory-beta.fandom.com/wiki/Jeopardy_at_Jutterdon?oldid=644467"
Community content is available under CC-BY-SA unless otherwise noted.