The Jeru were a reptilian race that mostly dwelt in subterranean environments. Because of this, the Jeru didn't possess eyes and used their senses to detect motion, especially when it came to hunting prey.

Across the Alpha Quadrant, the Jeru were regarded as one of the most vicious and unstoppable creatures in existence. This reputation was well earned as they bred quickly and infested mining colonies with ruthless efficiency as they lay their eggs and prepared for them to hatch.

In 2267, the Jeru established a colony with hundreds of eggs on the Federation mining colony on Angrena. When the eggs began to hatch around the colony's hydrogen tank, the Jeru damaged the tank and caused a massive explosion which caused a huge mine collapse and left over 100 people dead or seriously injured.

Thankfully, Captain James T. Kirk and Klingon Commander Kring were able to determine that the Jeru were responsible and the USS Enterprise was able to evacuate all personnel before all the eggs hatched. (TOS - Star Trek: The Manga - Uchu comic: "Art of War") 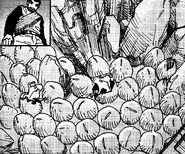 Jeru eggs.
Add a photo to this gallery

Retrieved from "https://memory-beta.fandom.com/wiki/Jeru?oldid=723942"
Community content is available under CC-BY-SA unless otherwise noted.