This article is about DS9 comic premiere. You may be looking for TOS comic: "Judgment Day!".
"It is Deep Space 9, sir. Long range scanners say it's... gone."
—Commander Worf, 2372

49236.5
"Judgement Day" was the first issue of Marvel Comics series of Star Trek: Deep Space Nine comics. The issue was released in November 1996. Story by Howard Weinstein, art penciled by Tom Grindberg and inked by Al Milgrom. Grindberg and Milgrom are credited for the cover art.

From solicitations: The station gets yanked through the wormhole into the Gamma Quadrant! What could possibly be behind this tragic turn of events? A power that terrifies even the fearsome Jem'Hadar!

Chief O'Brien notifies Kira of a message from Captain Sisko who fills in Kira on the fate of the observatory's crew. O'Brien interrupts them when something comes across the Wormhole. Five ships make it trough, the first two are of unknown origin while the others are Jem'Hadar. Magnitude ten radiation burst out of the wormhole at the same time as the ships pass and now prevent the wormhole from closing which results in high neutrino levels.

Communication with Sisko is cut due to the interference created by the energy field. Kira orders O'Brien to hail the Jem'Hadar ships, who do not answer. As the battle ensues around DS9, one of the alien ship hails the station, once on the viewscreen the alien identifies himself as being Amaralan and requests the station's help. At the same moment a weapon blast from a Jem'Hadar ship hits the habitat ring. Kira retaliates by having Lieutenant Commander Dax lock phasers on the Jem'Hadar ships and fires, resulting in a clear miss.

Dax explains that the energy field is disrupting the targeting system. She compensates for the distortion and fires again hitting the remaining Jem'Hadar ship's port engine resulting in their loss of altitude control. The station is then rocked by a tremor, Dax reports that DS9 in caught in the energy field along with one of the Amaralan ships. O'Brien reports that the station is being pulled into the wormhole, Kira orders for the use of the station's thrusters to maintain their position which has for only effect to raise the stress level on the station's hull. Kira orders power to be diverted to structural reinforcement, unfortunately that doses not prevent the hull plating on docking pylon 3 to buckle. The pylon rips itself from the station causing a hull breach which is contained by a force field.

Doubting that the station can pass through the wormhole in one piece Kira asks for ideas, Dax and O'Brien suggest lowering the inertial mass by using the deflector generator to create a low-level subspace field around the station.

Sisko and Doctor Bashir go over readings of the radiation levels at the vicinity of DS9 when a red alert summons Sisko to the bridge. Once there Commander Worf informs him that long range sensors show that the station is gone.

Sisko summarizes the situation; the Defiant as one unconscious Jem'Hadar in the brig, three Amaralans in sickbay, a wormhole that is locked open and a missing space station. The first thing he wants answered is Was Deep Space Nine destroyed?

Worf confirms that there is no debris which leaves two options, either the station is intact somewhere or it was destroyed by a weapon that leaves no trace. Sisko wants answers and heads to the brig for them. The Jem'Hadar soldier is reluctant to share any information with the Work or Sisko, who he considers inferior beings. Sisko demands to know what type of weapon was used to destroy the station. The soldier replies that the only weapon he knows of is the station sent to the Gamma Quadrant by the Federation as a vanguard to a hostile takeover.

Stepping out of the brig Sisko and Worf are greeted by Bashir who informs Sisko that he can now see the Amaralans in sick bay. Bashir asks what they learned from the prisoner. Sisko says no much. Once in the turbolift Worf mentions that he did notice something he never saw in a Jem'Hadar; fear in the soldiers eyes. Sisko concurs and theorizes that maybe the Jem'Hadar ships were not chasing the Amaralans but something was chasing both of them.

In sickbay, Sisko meets a couple of Amaralans. Commander Hoag thanks Sisko for treating their injuries. Sisko jumps straight to the point and ask why they were being chased. Hoag calmly explains that they need no reason for his people live under the dictatorship of the Dominion. Sisko mentions that they might have a point in common. Hoag does not seem to think so and gets aggravated and also refers to DS9 as a weapon meant to take over the Gamma quadrant. Sisko explains that all these allegations of invasion were propaganda by the Dominion. Sisko asks the Amaralan female if she as anything to add but she does not. Sisko also notices fear in her eyes also.

Later at Kai Winn's temple on Bajor, Sisko meets with Winn who asked to see him. She tells him that there his prophecy of apocalypse which begins with the The Wound in the Heavens. This "wound" is visible to all and Bajorans grow more afraid. Sisko mentions reports of Vedek Twahn taking advantage of this to bring followers to his cause. She mentions that thought his following is small he has others believing in this omen as well. Their conversation is interrupted by Worf who asks Sisko to join him at the Bajoran University Observatory as he as discovered what happened to DS9.

Once at the Observatory Sisko goes over the images collected from an astronomy satellite showing the "energy field" dragging the DS9 into the wormhole. Worf tells the captain that after running various computer simulations, he is sure that the station could of survived passage through the wormhole. Thought they can not travel thru the wormhole yet because of the residual radiation. Sisko orders Worf to find a solution fast.

Meanwhile outside the observatory the guards face a mob who demands explanations from the Emissary. When Sisko and Worf walk up to the gate and try to explain that Bajor his in no danger the crowd reacts violently and tear the main gate down. Worf knocks out a Bajoran reaching for Sisko and orders an immediately beam out back to the Defiant. In the Captain's quarters onboard the Defiant, Sisko inquires to why Worf ordered a beam out without his order. Worf tells him that his security his highest priority. Sisko admits that a riot was probably not the best venue for a reasoned discourse. Bashir informs Sisko that Selisa would like to meet with him privately.

All systems still out... life support's on emergency power... damage reports still coming in. We made it through the wormhole but we're not exactly in one piece.

O'Brien tucks Molly in her bed and joins Keiko by a window. Keiko asks him if they are ever going to get back. O'Brien tells her he wish he knew...

DS9... sucked through the Wormhole!

Commander Hoag of the Amaralans.

The Defiant arrives at a missing DS9.

DS9 is pulled into the Bajoran Wormhole.

A Jem'Hadar tries to escape the brig of the Defiant. 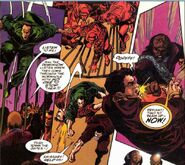 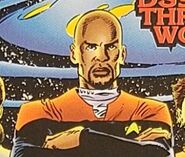 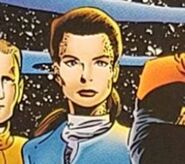