Julian Subatoi Bashir was a genetically-engineered human man, born on 29 August 2341 in Great Britain on the planet Earth. He served as a chief medical officer for Starfleet aboard Federation starbase Deep Space 9 and the starships USS Defiant for several years, including the duration of the Dominion War. Bashir was a distinguished doctor, aided by his genetic enhancement.

For other uses, see Julian.
See Bashir for other articles with titles that contain, either by relationship or by coincidence, this character's surname.

Julian was born with serious learning disabilities, and at age six, he still had trouble telling the difference between a dog and a cat. Julian's parents Richard and Amsha Bashir felt that it would be in his best interests to have genetic resequencing performed to enhance both Julian's mental and motor skills at a medical facility on Adigeon Prime. Because genetic resequencing was illegal in the Federation for any reason other than correcting serious birth defects, Julian quickly learned to never speak of the procedures that were performed on him. Bashir was lucky in that doctors selected by Bashir's parents to perform genetic modifications on him were competent, leaving Bashir with no side effects that would have limited his ability to function in Federation society. Other people had gone to far less scrupulous doctors to have their children genetically modified. As a result, many of these children developed side effects to the treatment that left them unable to function in normal society, forcing the Federation to have these children institutionalized. (DS9 episodes: "Doctor Bashir, I Presume", "Statistical Probabilities")

While Julian was on the planet Invaria II, an ion storm hit. Julian watched a young girl die as his father went for help because no one had the medical knowledge to save her. When his father returned for him, he was told that a plant that was growing all around them would have saved her life. Julian often told himself that this was why he started a career in medicine. (DS9 novel: Warchild)

Julian's enhanced intellect was formidable, and at the age of eight, he discovered a useful, mnemonic trick. Inspired by the writings of Leonardo da Vinci, Julian constructed a mental replica of the 6th century Istanbul cathedral of Hagia Sophia entirely within his mind. Within this mental cathedral, he stored all of his growing knowledge. (DS9 novel: Cathedral)

During his internship, Bashir undertook a short tour of duty in a rehab clinic for Starfleet personnel who had been prisoners of war. (DS9 novel: Warped)

As a med student, one of its pre-requisites included study of "Comparative Alien Physiology", written by Dr. Leonard McCoy, in 2272. (TOS novel: Ex Machina, VOY episode: "Message in a Bottle")

He graduated as Salutatorian of his class.

Bashir was attending the Academy when the Borg attacked Earth in early 2367. (DS9 novel: The Siege)

In 2369, Bashir was assigned to the newly designated starbase Deep Space 9 as CMO for both the station, and later the starship USS Defiant. (DS9 episode & novelizations: Emissary, The Search)

Shortly after his arrival on the station, Julian befriended Cardassian tailor Elim Garak, who had been a former member of the Cardassian Obsidian Order. (DS9 episode: "Past Prologue")

In 2370, Bashir joined an away team on the USS Amazon to the Cardassian mining moon Davonia to rescue the kidnapped Horta Ttan. In the course of the team's escape from the moon he had to give the order to open the moon's docking bay to space, killing numerous Cardassians. Bashir did not realize the consequences of his order until it had been carried out and was momentarily stunned by the what he had done. (DS9 novel: Devil in the Sky)

Later that year, Bashir "crossed over" to the mirror universe, where he met Miles "Smiley" O'Brien and played a significant part in the formation of the Terran Rebellion. (DS9 episode: "Crossover")

Although Bashir never met his mirror universe counterpart, he considered him to have been "something of a brute, a hot-tem­pered fighter with quite a vicious streak" based on what he had been told about him by Captain Sisko. (DS9 novel: Fearful Symmetry)

In 2371, Bashir took part in a highly-classified operation that included, the resurrection of James T. Kirk. He operated on the removal of the deadliness of the nanites that the Borg had implanted on him, as well as memory recovery, under the guidance of Admiral Leonard McCoy. Afterward, he took part in what seemed, at the time, as the destruction of the Borg Homeworld, where he witnessed Kirk disappear once again. It was then that he met Worf, as well. (TOS novel: The Return)

Late in the year 2375, he began a romantic relationship with Lieutenant Ezri Dax. (DS9 episode & novelization: What You Leave Behind)

By the year 2376, Bashir had been promoted to lieutenant commander. (N-Vector, Divided We Fall)

Bashir had an aunt who doted on him as a small child, prior to his augmentation. As an adult, he recalled her giving him hot cocoa and biscuits after he'd been playing out in the cold, and of her giving him a balloon, which she tied to his wrist to keep from floating away. (SCE eBook: Wounds, Book 2)

He could also be related to Juliet Bashir who was the XO of the Slayton when it was lost. (SA - Starfleet Academy comic: "Issue 3")

Julian had a preference for eating scones and jam, something recalled by Elim Garak when interviewed by Jake Sisko in 2389. (ST website: The Path to 2409)

A major tangent of the prime timeline was created in 2373. Called the First Splinter timeline, this alternate reality's Julian Bashir was an influential player in Federation politics and also the battle to stop the Devidian temporal apocalypse. (Coda) 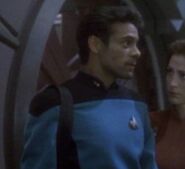 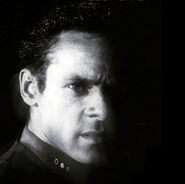 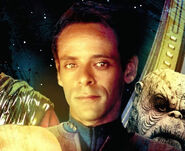 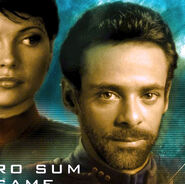