For other uses, see Kang.

Dahar Master
Kang, son of K'naiah was one of the greatest Klingon warriors and diplomats to have served the Klingon Empire.

Kang was a QuchHa', who descended from Klingons who had become infected with the augment virus in the 2150s. Despite his difference from other Klingons, he rose to become a great military leader, strategist and diplomat, and had many skirmishes with the Federation. By the 24th century, he was made a Dahar Master and honored elder in the Empire.

As well as being an honored warrior, he was also a family man, he was married to Mara who served beside him on his many campaigns as his science officer. The couple later had a son, who was killed by the Albino.

Over the course of Kang's career he commanded many vessels; the Krims Run, the Doj, the Suvwl',the Voh'takh, the Klolode, the K'tanco, the Ha Havat and Sompeck as well many others, leading all these vessels with honor, glory and courage. (ST reference: The Klingon Art of War: Ancient Principles of Ruthless Honor)

Prior to 2265, Kang served under the command of Captain L'Kaln aboard the Krims Run. The Krims Run was assigned to protect Kromrat , a Klingon colony from depradators. Kang beamed down and assured the colonist that they would not destroy the colony. L'Kaln, however, believed that a orbital bombardment was the only solution. Kang pleaded with L'Kaln about honor and the word he gave to the colonists. Kang realized that L'Kaln did not understand the meaning of honor and challenged L'Kaln to a duel. Killing L'Kaln, Kang assumed command of the Krims Run and began a long career with the Empire. (ST reference: The Klingon Art of War: Ancient Principles of Ruthless Honor)

By 2265, Kang had risen to command the IKS Doj; it was his first command and he was eager to serve the Empire. Later that year, the Doj was ordered to intercept the USS Enterprise, after it had crossed the Neutral Zone and was en route to Qo'noS. Kang managed to capture Captain James T. Kirk and discovered that the Enterprise had been taken over by Klingon renegades, named M'tachtar. Kirk agreed to remain as Kang's prisoner, if he allowed him the chance to regain control of his ship. Kang granted Kirk one hour, but did not offer any additional support. Despite the odds, Kirk was able to regain control and transported the M'tachtar to the Doj so they could be executed. (TOS - My Brother's Keeper novel: Enterprise)

In 2267, Kang was captain of the IKS SuvwI'. In that year, his friend Koloth found his ship, the IKS Gr'oth infested with tribbles beamed aboard by the USS Enterprise. Koloth contacted Kang for assistance, and Kang suggested a battle to ease his mind. Koloth took his ship into Tholian space and contacted Kang again for help after his ship was badly damaged. Kang and his ship the SuvwI' entered the battle and protected the Gr'oth, beaming aboard its crew while Koloth set the self-destruct to destroy his ship and the tribbles that it carried. (TOS short story: "A Bad Day for Koloth")

By 2268, Kang was in command of the D7-class battle cruiser, IKS Voh'tahk. That year he was deployed alongside the IKS Devisor's Kor and IKS Klothos' Koloth to pacify the dilithium mine at Beta Thoridar, which was experiencing an ongoing conflict between its HemQuch and QuchHa' crews. Command hoped that the three ships, crewed only by QuchHa', might aid the situation. Unbeknownst to anyone it was the Beta XII-A entity that caused the rising tensions. Kang's rendezvous with the two commanders allowed him to meet Kor - beginning a friendship that would last a century. Kang, Mara, Kor and Koloth would discuss the difficulties faced by QuchHa' - even those, like themselves, of noble origins. (ST novella: The Unhappy Ones)

Although the three commanders were successful at Beta Thoridar, Kang and his crew were affected by the Beta XII-A entity. His vessel would leak a massive amount of hazardous radiation, and it was deemed a hazard to the area, resulting in the Enterprise destroying the ship. Kang and the crew managed to escape to planet Beta XII-A. The entity manipulated the crew to believe that Starfleet was responsible, so when they were rescued by the Enterprise, Kang and his men attempted to seize control of the ship. The attempt was stopped when Kang and Kirk discovered that they were being manipulated and worked together to stop the entity. (TOS episode: "Day of the Dove")

Following the destruction of the Voh'tahk, Kang was given command of the IKS Klolode II - in thlingonHol again Voh'tahk - another D7-class cruiser. Mara was promoted to his first officer. In August 2269 Kang was in command of a mission in the Gonmog Sector to recover a member of the Shedai-manipulated Tomol on Nereus II. Containing the meta-genome, the Klingons desired to learn the secrets of the Tomol's manipulations to craft weapons. Kang's Voh'tahk was dispatched with the Bird-of-prey, IKS Homghor commanded by the younger Captain Durak, to Nereus to collect a scout team and Tomol subject. There Kang and Durak encountered the Starfleet vessels USS Sagittarius and USS Endeavour. (SKRS novel: Second Nature)

In 2270, Kang was tasked with capturing Federation Agricultural Specialist Jean Czerny, who was deemed to be the solution to the Empire's famine. After working to solve the problems, Czerny was returned to the Enterprise at Deep Space Station K-7. (TOS novel: Pawns and Symbols)

Around 2270, a cure was discovered for the augment disease that altered a good percentage of the Klingon people. While many who had been afflicted with the disease were cured, including Kang's friend Koloth, Kang and many other Klingons proved resistant to this cure, and were left with their more human-like appearance for another 20 years. (ENT episode: "Divergence"; TOS movie: Star Trek: The Motion Picture; VOY episode: "Flashback"; TLE novel: Excelsior: Forged in Fire)

A few months later, the Klolode II was the first Klingon vessel to respond to a distress call from the colony on Tarnak II. Kang discovered the Enterprise in orbit and sensors revealed Starfleet weapons signatures on the surface. Kang launched an attack on the Enterprise and was close to destroying her, before she managed to escape. The attack was later revealed to be conducted by a group of Metans from Meta IV. (TOS comic: "The Chosen")

In December 2271, Kang attended the Romulan Territorial Conference being held on Earth. At the conference, Kang revealed to Admiral Kirk a plot to spark an interstellar war between the Federation, Klingon and the Romulans. The plot had involved three of Enterprise crewmates, as well as the murder of Dr. Mark Piper. (TOS novel: Traitor Winds)

In early 2290 another cure to the augment disease was discovered by Antaak's grandson Hurghom, which finally cured Kang, Mara, and many other Klingons who had been resistant to the earlier cure. This new cure restored the standard Klingon physiology of Kang and the others still suffering from the augment disease.

In 2291, Kang and Mara learned that she had become pregnant with their first child - which they named DaqS in honor of their friend Curzon Dax. That same year, Kang commanded the IKS K'tanco, with Mara serving as his first officer. That year, he saved a Klingon base from an attack by two Romulan warbirds. Shortly thereafter, he responded to a distress signal from Klingon Captain Klaa's ship, which had been disabled by a Torye subspace-disruption weapon. Learning the Torye's plan to capture a prototype Klingon mobile battle base, the K'tanco set off in pursuit, along with the USS Enterprise-A, which had been pursuing the Torye. Together, both ships stopped the Torye and destroyed the base. (TOS - Mere Anarchy eBook: The Blood-Dimmed Tide)

In the aftermath of Chancellor Gorkon's assassination and the imprisonment of Kirk and Doctor Leonard McCoy, Kang stood in defense of the Klingon-Federation border at the Azure Nebula. There, in command of the IKS HaH'vat, he prevented an attempted rescue by Captain Hikaru Sulu of the USS Excelsior. (VOY episode: "Flashback")

Sometime before 2326, Kang had an aid named Rodek who was a good grinnak player, according to Jadzia Dax. (KE novel: A Burning House)

In 2346, Kang was in command of the IKS Sompek and led an armada that escorted Chancellor Kravokh and several members of the Klingon High Council -- among them K'mpec -- on a tour of the Empire. Upon receiving a distress call, Kravokh insisted, against Kang's better judgment, that the entire armada investigate. That distress call was a ruse that sent most of the ships assigned to that sector away, leaving the way clear for the Romulan Star Empire to attack the Khitomer outpost.

Upon realizing the deception, Kang ordered the fleet to Khitomer without consulting with Kravokh. K'mpec then challenged Kravokh for the chancellorship, and Kang made it clear that, should Kravokh prevail, Kang would be next to challenge him. However, K'mpec won the duel, and Kang immediately asked the new chancellor for his orders, a courtesy he did not extend to Kravokh. (ST - The Lost Era novel: The Art of the Impossible)

Kang finally located the Albino in 2370, and called Koloth and Kor to join him in finally fulfilling their blood oath by killing the man who had killed their sons. Aided by Jadzia Dax, the three Klingons stormed the Albino's complex. Kang was mortally wounded but was able to inflict the killing blow on the Albino. (DS9 episode: "Blood Oath")

Kang and Koloth were honored with the Quv van je tay ceremony after their deaths. (DS9 comic: "Remembrance") 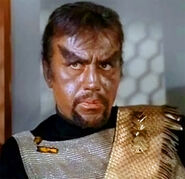 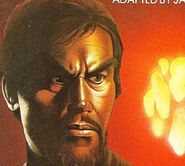 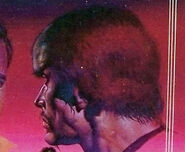 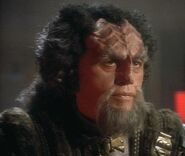