The Kar'Fi class was a Fek'Ihri starship type, a tier 5 battle carrier class in Fek'Ihri Horde service from the 2400s decade. Following the Horde's return from Gre'thor, the Klingon Defense Force appropriated ships of this class and converted them for Imperial use. (STO - Fek'Ihri Return mission: "Afterlife")

The Klingon Defense Force first encountered the Kar'Fi class in the Boreth system in 2409, where one such ship launched S'Kul-class fighters and tortured souls, after the KDF vessel arriving in the system had successfully dispatched a squadron of Fer'Jai-class frigates and a K'Norr-class escort. (STO - Fek'Ihri Return mission: "Afterlife")

The KDF captured Kar'Fi-class battle carriers and retrofited them for service for the Klingon Empire. These captured ships were equipped with a single hangar bay, housing two wings of S'Kul fighters, which could be replaced by a Fer'Jai-class frigate. (STO - Season 2: Common Ground mission: "First City")

As a battle carrier, the Kar'Fi class was less amored and more maneuvered than regular carriers, such as the Klingon Vo'Quv-class carrier. Its hangars could hold two wings of assault craft. By default, the Kar'Fi could launch S'Kul fighers, capable of capable of using ramming speed to deal physical damage to other vessels, and tortured souls, Fek'Ihri fiends able to spacewalk without environmental suits. (STO - Fek'Ihri Return mission: "Afterlife")

Special equipment included a universal console of a phase shift generator. This console could be equipped only Kar'Fi-class starships, and would temporarily phase them out of the space-time continuum for increased damage resistance.

The vessel could receive a refit from tier 5 to fleet tier 5 through the Klingon Fleet Starbase. (STO - Season 2: Common Ground mission: "First City")

Ships of this type echoed the design language of other spacegoing Fek'Ihri vessels: a prominent red deflector dish at the bow, embedded between dark gray plates and tendrils. The impulse engine, situated at the rear, exuded a fiery red-and-pink plasma stream that made it look like the ship was riding on fire. The vessel appeared vaguely reminiscent of Terran lionfish. (STO - Fek'Ihri Return mission: "Afterlife")

In the 25th century, the KDF design of the Kar'Fi-class battle carrier allowed its commanding officer to choose from different designs of livery, which could be modified further at starbases. These options were numbered Types. (STO - Season 2: Common Ground mission: "First City") 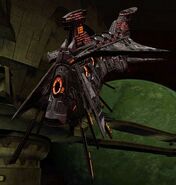 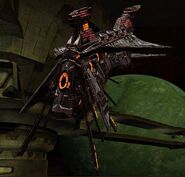 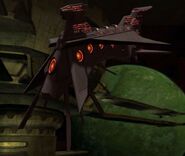 Fek'Ihri vanity shield.
Add a photo to this gallery

The Fek'Ihri returned in 2409 and attacked the Klingon Empire in an attempt to ursurp it and restore Molor to the Klingon throne. (STO - Fek'Ihri Return missions: "Blood of the Empire", "The Gates of Gre'thor")

The Horde blockaded the orbit of Boreth to prevent Emperor Kahless from reaching the Boreth Monastery. A KDF vessel broke through the blockaded by engaging and destroying the Fek'Ihri ships. These included a Kar'Fi-class battle carrier that sent tortured souls and S'Kul fighters against the Klingon forces. (STO - Fek'Ihri Return mission: "Afterlife")

In the followng years, ships of the class were seen again in attacks on the Klingon Fleet Starbase. (STO - Season 6: Under Siege missions: "Fleet Alert", "Starbase Fleet Defense")

The Alpha Quadrant Alliance continued to practice fighting against ships of the Horde in the holographic scenario Combat Simulation 347. (STO - Season 6: Under Siege mission: "No Win Scenario")

Retrieved from "https://memory-beta.fandom.com/wiki/Kar%27Fi_class?oldid=670599"
Community content is available under CC-BY-SA unless otherwise noted.