There have been multiple timelines, alternate realities and parallel universes that have all contained versions of Kathryn Janeway, as well as various clones and replicants. 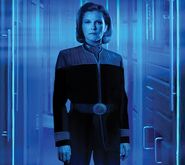 Kathryn Janeway, from what is considered the primary universe. 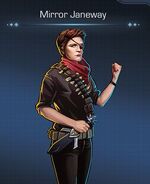 Kathryn Janeway, from what is considered the mirror universe.

Jenkins, from the Doctor's initial "Photons Be Free" holonovel draft.

In an alternate timeline beset by the temporal anomaly crisis, at least eighteen different versions of Janeway was pulled into the late 24th century. Around the year 2380, different timelines were interwoven, and most of them joined Starfleet to help Q resolve the temporal anomaly crisis. Their skills qualified them as scientist. She was also skilled in the fields of command and diplomacy. (ST video game: Timelines January 2021 event: "Convergence Day")

According to Q, following her return to the Alpha Quadrant, it has become a fixed point in time for all versions of Kathryn Janeway to die on stardate 57445, with Janeway being shown brief 'flashes' of her other selves to reinforce this revelation; the only two Janeways to live past this date did so only with the aid of the Q. (VOY novels: The Eternal Tide, A Pocket Full of Lies)

In the alternate timeline created by the red wormhole and the War of the Prophets, Admiral Kathryn Janeway created Operation Guardian in 2400 in order to combat the threat of the Bajoran Ascendancy. Her plan resulted in Starfleet and Borg forces joining together to assault Gateway in order to use the Guardian of Forever to destroy the red wormhole before it united with the Bajoran wormhole. She landed her forces while combating the Grigari and was in sight of the Guardian when the Grigari activated a Singularity bomb which killed Janeway and everyone on and around the planet. (DS9 - Millennium novel: The War of the Prophets)

In another alternate timeline in which the Cardassian Union did not withdraw from Bajor in 2369, Captain Kathryn Janeway was in command of a version of Voyager which was not stranded in the Delta Quadrant by the Caretaker in 2371. Her senior staff included first officer Lt. Commander Aaron Cavit, tactical officer and security chief Lieutenant Tuvok, conn officer Lieutenant Veronica Stadi, chief medical officer Dr. Fitzgerald, chief engineer Lieutenant Joseph Carey and operations officer Ensign Harry Kim. By 2373, she was married to Mark Johnson, who cared for her dog Molly.

The ship was part of a task force consisting of nine ships - which also included the USS Bellerophon and the USS Intrepid - sent to Dorvan V in 2373 order to investigate recent suspicious activities being carried out by the Cardassians on the Federation border. The ships were soon fired upon by a fleet of Galor-class warships armed with phased polaron beam weapons. Unbeknownst to the Federation at this time, these weapons had been provided by the Cardassians' newfound Gamma Quadrant allies, the Dominion. The Cardassians had made contact with the Dominion several years earlier via the wormhole which they discovered in the Bajoran sector, the existence of which they kept secret from the other major Alpha Quadrant powers.

In the midst of the battle, Voyager was able to gather detailed sensor readings. Moments before the ship was destroyed with all hands, Tuvok transmitted these sensor readings to Starfleet Command, enabling the Federation to develop countermeasures against the phased polaron beam weapons. The Intrepid was destroyed along with Voyager whereas the Bellerophon barely escaped intact. Of the six other vessels in the taskforce, only one survived. (TNG - Myriad Universes novel: A Gutted World)

In an alternate timeline in which the USS Voyager was forced to turn back from its journey home to Earth, Kathryn and Chakotay became lovers and would eventually have a child, Shannon Sekaya Janeway. (Star Trek: Myriad Universes novel: Places of Exile)

In another alternate timeline, Janeway and B'Elanna Torres were both killed during a Krenim attack on Voyager in 2373. Chakotay succeeded her as captain and was still in command of Voyager in 2379. (VOY episode: "Before and After")

When the Krenim attempted to destroy Voyager with a chroniton torpedo, Chakotay of 2377 was forced to work with the Kathryn Janeway of 2370, revealing various key details about the ship's future to her as they sought to resolve the crisis. Once he was able to prevent the events that led to Voyager being fractured across time, Chakotay presumed that this Janeway had been 'erased' as she lost all memory of the events, but it was later revealed that she had been abducted from the ship by the Krenim as part of a plan to prevent her potentially interfering with the standing of the Krenim Imperium. She was manipulated into acting as denzit or military commander for the Rilnar during a protracted conflict with the Zahl on the planet Sormana. A Krenim agent named Dayne was surgically altered to look like a Rilnar and was assigned to oversee Kathryn's integration into Rilnar society. He maneuvered her into the position of denzit. This version of Kathryn was forced to send a message to Starfleet informing them of her resignation.

Dayne and Kathryn became lovers. Subsequently, Kathryn gave birth to her and Dayne's daughter named Mollah. After nearly dying during childbirth, she recovered and returned to her position. Kathryn assumed that Dayne and their daughter had been captured by enemy forces. This, in turn, was Kathryn's motivation to win the war. When the Full Circle Fleet was alerted to the existence of this alternate version of Kathryn Janeway, Voyager was assigned to investigate. Tuvok was temporarily assigned to Voyager to work with the Voyager crew in order to appeal to the denzit to stop the conflict and gather intelligence. Tuvok, for his part, was still grieving for his son who had died during the Borg crisis. Finding sympathy with the denzit's situation, Tuvok easily renewed a friendship with this version of Kathryn Janeway. Subsequent events saw Tuvok save the denzit's life during a military operation and being seriously injured as a result. Tuvok was treated by the denzit's personal physician. The denzit would meet Admiral Janeway in person.

Dayne was found to be alive as well. The truth of Dayne's true identity and the Krenim's manipulations were exposed. After Tuvok brutally beat him, Dayne admitted that his and Kathryn's daughter was alive. Dayne had spirited their daughter away safety into the past. He accomplished this using naturally occurring time portals. He placed his daughter in the care of guardians. These guardians were, in actuality, Q and his wife in disguise. Later, Kathryn testified at an inquiry about these events. Subsequently, she resigned her position as denzit. After this, the crew of Voyager took in this version of Kathryn Janeway with the intent of helping her recover from these events. Dayne, though, covertly infiltrated the Full Circle fleet. He then tried to kidnap Kathryn so she could be reunited with their daughter. He was stopped and then an away team was assembled to escort the former denzit and Dayne. She was taken into the past by Dayne with the Starfleet team providing protection. After this, Dayne was tortured by the Krenim for information about Kathryn's location. He refused to cooperate and was killed. Q ensured that this timeline would be 'cut off' from the rest of the multiverse for the duration of this Janeway's life so that she could live in peace. (VOY novel: A Pocket Full of Lies)