The Original Series (IDW ongoing) No. 14

2259 (Kelvin timeline)
"Keenser's Story" was the fourteenth issue of IDW Publishing's ongoing series of Star Trek comics. The stand-alone issue was an original story focused on the character of Keenser. Issue art was by Stephen Molnar, with colors and lettering by John Rauch and Neil Uyetake, respectively. This comic was edited by Scott Dunbier, with Roberto Orci credited as creative consultant.

Keenser is still getting used to being on the USS Enterprise because he is smaller than the others on the starship. This also gives him trouble at engineering. Keenser recounts his past.

As a child on the planet Royla, Keenser was often picked on for being larger than everyone else. His father often had to save him, and he was getting tired of it. Then in the year 2230, the USS Kelvin contacted Royla. Captain Robau, Lieutenant Commander Kirk, and Lieutenant K'Bentayr arrived using a shuttlecraft, as the transporter was offline for repairs at the time, and greeted the Roylans peacefully. Later while trying to repair the shuttlecraft, Keenser helped pinpoint a problem. Keenser joined Starfleet and graduated three years later, just as the Kelvin was destroyed. He went through many assignments. His latest, prior to the Enterprise, was Delta Vega, in the Vulcan system. He was the chief engineer there. At the time, the outpost at Delta Vega was full of people. As time went on, many of them left, and Keenser was alone until Montgomery Scott arrived. One day, when the two were walking outside they came across a monster which Keenser scared by staring at it. The two were firm friends since although they did not always get along very well.

Keenser succeeds in repairing a problem by going through a small shaft. After that, Keenser laughs.

2250s
Keenser is assigned to Delta Vega as its chief engineer.

2258
Scott and Keenser transfer to the USS Enterprise. 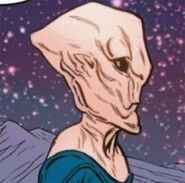