The Original Series No. 24

The story involves an attempt by the Romulans to rewrite history so that the Federation never existed.

This novel is infamous for having content that could be read as possessing homoerotic undertones akin to those commonly found in fan "slash" fiction. A first printing of this novel was released before being censored by the publisher/licensee for out-of-character remarks about the alternate Kirk and Spock.

From the back cover: Second History: A Romulan time-tampering project that has transported the Enterprise and the galaxy into an alternate dimension of reality. Now Kirk is an embittered young ensign and Spock is a besieged starship commander.

Lured into a Romulan trap, Captain Spock and Ensign Kirk must free themselves from both their captors and their own altered selves...before the galaxy hurtles toward total destruction!

Captain Kirk has been experiencing disturbing dreams during a patrol of the Romulan Neutral Zone. Hikaru Sulu and Uhura tease Lieutenant Jeremy Richardson about his love life; Richardson says he might turn his efforts to Yeoman S'Parva, a Katellan who has recently been assigned to the Enterprise in the psyche department. Kirk and Spock tell each other that they have both been dreaming that Spock is the ship's captain and that Kirk is an ensign. Kirk shows Spock a mysterious, manually coded transmission from Starfleet Command, which cryptically suggests Romulan activity and extends the Enterprise's patrol indefinitely. Kirk has heard rumors that three more starships are being sent to the sector and that a time travel experiment is going on in the Romulan Empire. Kirk tells McCoy about the dreams. McCoy decides to interview everyone on the ship to find out who has been dreaming.

As Kirk sleeps, reality shifts around him. Ensign Kirk awakens in his cabin on the VSS ShiKahr, shared by his roommate, Paul Donner. Kirk, an ex-convict who has been on the ship less than twenty-four hours, injects himself with the drug lidacin. Captain Spock, walking the night-time corridors of his ship, has a fit of vertigo during which he sees a vision of the corridors of the Enterprise and of Kirk. Kirk gets into a fight with Donner, who taunts him for having been given the choice between Starfleet and prison.

In Engineering, Ensign Reichert sabotages the flow-valve to the matter/antimatter pods. Chief Engineer Scott discovers the problem and alerts Spock on the bridge to shut down all nonessential power. In Sickbay, Lieutenant Christine Chapel tells Spock that Reichert was violent when Security arrested him, and that McCoy has sedated him. McCoy discovers that Reichert has two distinct sets of brain waves. He is concerned about the incident's possible effect on humans in Starfleet, since no one has ever before tried to destroy an Alliance starship and the Vulcan High Council only reluctantly accepted humans onto starships in the first place. Spock decodes a priority message from FleetCom; the message, from Admiral S't'kal, orders ShiKahr to continue patrolling the Neutral Zone and await the arrival of two other starships, and contains plans for an Alliance invasion of Romulan territory. McCoy unwittingly suggests to Spock the possibility that Admiral S't'kal may not be in his right mind, and that this may be connected to Reichert's condition and Spock's own symptoms.

In flashback, Commander Tazol of the Romulan flagship Ravon recalls recent events. His new wife, Sarela, confronted him on the Ravon's bridge with her opposition to the Praetor's plan to send operatives back in time and prevent the foundation of the Federation. The Praetor was about to arrive aboard Ravon, which would enter hyperspace and thus be shielded from the effects of the historical alteration. Sarela pointed out to Tazol, who had only gained command of the Ravon through his arranged marriage to her, that no one knows what the Praetor looks like and that the man coming aboard their ship might be an impostor.

Ensign Kirk reports to Spock in his cabin for a disciplinary consultation. Kirk had been accused of murdering Sorek, one of his Vulcan instructors at the Academy, but has no memory of the night of the murder. He was subjected to the Talos Device, a mind probe which left him suffering from nightmares. Spock feels strangely protective of Kirk, and insists on reassigning him to different quarters. McCoy and S'Parva perform a vid-scan on Lieutenant Dane Christensen, producing a negative response. Most of the other crew-members scanned had visions of "a golden-haired, golden-eyed captain."

Having left hyperspace, the Ravon returns to Romulus and accesses computer records of the newly altered "Second History", which Sarela compares with the ship's own records of the previously-existing "First History". The Romulan operatives succeeded in assassinating three humans crucial to the founding of the Federation, preventing Earth from taking a central role in that process. However, a Romulan attack on Vulcan in the 22nd century brought about the formation of an Interstellar Alliance of Planets led by Vulcan. Tazol brings these results to the Praetor's aides, but the Praetor asks to see Sarela rather than Tazol.

McCoy presents Spock with the results of the vid-scans. He theorizes that the galaxy has been shifted into a new reality, and that those crew-members experiencing symptoms are reacting to the disparity between their present life-roles and those they had in the original timeline. He further suggests that the thirteen crew-members whose vid-scans were negative were already dead in the original history. S't'kal orders the ShiKahr to Canus Four on a diplomatic mission; Spock accepts the order and requests Kirk's presence on the landing party. Kirk's new roommate, Jerry Richardson, tells him that even though he works in the psyche lab he instinctively stepped into the navigator's chair on the bridge. Spock, Kirk, Donner, McCoy and Ambassador Selon, who is attached to the ShiKahr, beam down to Canus Four but are attacked by primitives; an electrical storm affects the transporter so that only McCoy and Selon are beamed up, while Spock is felled by a spear in the back.

Sarela meets with the Praetor, who is generally thought to be male but is actually Thea, the former Romulan Commander whom Kirk and Spock once tricked. Thea explains to Sarela her plan to induce Spock to sign a peace treaty, the effects of which may persist even if the Alliance succeeds in restoring First History. In that case, those individuals who reverse the historical alteration will retain memories of both histories.

Spock awakens in Sickbay on the ShiKahr. Donner was killed on the landing party; everyone else is safe. On the Ravon, Thea and Sarela discuss their plan to abduct Kirk in order to force Spock to impersonate the Praetor and present the Vulcan Tenets of Discipline to the Romulan people. Spock awakens again from an eighteen-hour healing trance. S't'kal now denies that the ShiKahr was ever sent to the Canusian system. Richardson and S'Parva perform a mind-link during which Richardson sees himself entering his cabin on the Enterprise after speaking to Captain Kirk; S'Parva has to pull his mind back into Second History. Spock learns that Kirk has not been seen since returning from Canus Four. He finds Kirk in the ship's arboretum and forcibly initiates a mind-meld, during which the two of them become more fully aware of their personas in the other timeline and of Kirk's determination in the face of seemingly hopeless situations. During the meld Kirk drops his Academy ring in the loose sand of the garden.

Spock contacts Christopher Pike, in command of the VSS T'Ruda, who agrees that he and Captain Benedict of the VSS S'Tasmeen will take their ships to Starbase 10 to stop S't'kal. Spock realizes that the effects of the reality shift have induced pon farr in him. The ShiKahr is contacted by Thea's transport, the T'Favaron, which claims to have become separated from the Ravon and drifted into Alliance space. Thea and Sarela come aboard the ShiKahr and are confined to quarters. Later, two of Thea's slaves, disguised as Vulcan security guards, take Kirk and Richardson from their cabin and transport them to the Ravon, from which they are sent to a planet in Romulan space. In the hope that he can find a way to correct the time alteration, Spock agrees to Thea's demand that he accompany her back to Romulus and pose as the Praetor. McCoy accompanies Spock as his "slave". Kirk and Richardson find themselves on a desert planet; they decide to attempt long-distance mind-links with Spock and S'Parva respectively to let them know where they are.

Thea, Sarela, Spock, McCoy and S'Parva take the T'Favaron to the Ravon. While Spock tours the ship, S'Parva searches the computer for information about the historical changes, but the tour is interrupted by news that the Governor of Romulus has gone mad and attacked the Praetor's palace. Spock discovers information in the computer tapes about the gravitational slingshot method of time travel. He then receives the telepathic message from Kirk, and is able to identify the constellations visible from Kirk's location as those seen on Remus. The effects of pon farr worsen, and Spock loses consciousness.

On Remus, Kirk's mind-link to Spock causes him to begin to be affected by Spock's pon farr. Even when he and Richardson bathe in a rock pool, the heat does not leave his body. On the Ravon, McCoy is unable to do anything for Spock. Thea forces McCoy to leave the room and begins to help Spock through pon farr; he resists her strongly but ultimately yields, recognizing that it is the only way to save his own life.

Spock, Thea and the others arrive at the Praetor's palace on Romulus. Thea confers with Tavor, the head of the army and her former lover, and learns that there have been further incidents of madness in the Empire. Spock convinces Thea that the universal situation requires that she abandon her plans and instead help him restore First History. He cannot remain with her, since the Second History version of himself will die or cease to exist no matter what happens. Spock also insists that they take Kirk into the past with them to foil the Romulan operatives so that Kirk will retain his memories of Second History and use his influence to seek peace with the Romulans. Thea decides to leave McCoy and S'Parva on Romulus as hostages.

Thea, Sarela and Spock pick up Kirk and Richardson from Remus, then take the T'Favaron toward Romulus' star to initiate the slingshot effect. Thea reveals that the two Romulan operatives are androids. The Romulans drop off the three Alliance officers near San Francisco in 2097, six hours before a conference that will lay the groundwork for the Federation. Spock, Kirk and Richardson find the hotel where the conference is taking place and enter the conference room. Kirk identifies the androids by having Spock take off the wool cap covering his ears; only the androids fail to react with shock. The three dignitaries who were the assassins' targets flee to safety while Kirk and Spock fight and disable the androids, but both Richardson and Spock are hit by the androids' poison capsules. Richardson dies, and Spock is dying as he destroys the androids with a Romulan disruptor. Ensign Kirk and Captain Spock take the elevator to the hotel roof, where they perform a mind-meld as reality shifts around them and they cease to exist.

On the Enterprise, everyone has stopped having strange dreams except Kirk, Spock and Richardson. Kirk finds Ensign Kirk's ring buried in the sand in the arboretum. Kirk and Spock perform a mind-meld to discover the truth of what has happened, after which they remember everything that happened to their alternate selves. Despite the evidence of the ring, Spock thinks they do not have enough proof to inform Starfleet Command of the incident. They realize that Thea must remember events even more clearly than they do. Kirk returns the ring to the garden, knowing that it will vanish and return to his other self. 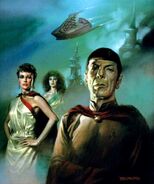 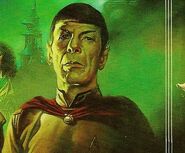