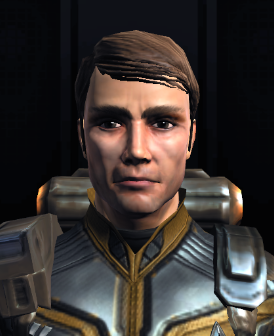 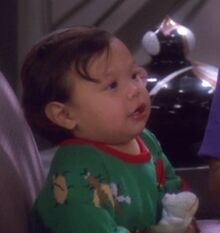 Kirayoshi O'Brien (born 2373) is a male human who is the son of Miles and Keiko O'Brien. He is the younger brother of Molly O'Brien.

In 2372, Keiko was working on Bajor, and was away from her husband for a number of months. During this time, she came back to the station for a brief visit with her husband, and as a result became pregnant. She soon realized that she was pregnant, and Molly also found out that she would had a little brother on the way. Upon moving back to the station, Molly broke the news to her father that she had a little brother coming, and Keiko confirmed to Miles that she was pregnant. (DS9 episode: "Accession")

A short time later, Keiko, Kira Nerys, and Julian Bashir were traveling together on a runabout when the ship suffered an accident. Keiko was seriously injured in the accident, and Doctor Bashir was forced to transfer the baby to Kira in order to save both Keiko's life and that of her unborn child. Because Bashir was unable to transfer the baby back to Keiko, Kira had to carry the baby to term - a pregnancy complicated by the fact that she was a Bajoran carrying a human child. (DS9 episode: "Body Parts")

In a traditional Bajoran ceremony, Kirayoshi was born in early 2373. (DS9 episode: "The Begotten")

By 2409, O'Brien had joined Starfleet and held the rank of lieutenant. He was assigned to Memory Alpha as a member of the Starfleet Corps of Engineers where he specialized in helping officers upgrade their equipment. He was later reassigned as Chief Engineer of the USS Enterprise-F. (ST video game: Online)

Retrieved from "https://memory-beta.fandom.com/wiki/Kirayoshi_O%27Brien?oldid=439322"
Community content is available under CC-BY-SA unless otherwise noted.