For the novel series of this name, see Star Trek: Klingon Empire.
For the mirror universe counterpart, see Klingon Alliance.
"If a Klingon does not fight, he does not breathe! Make allies if you must but never leave the Empire without an enemy. Klingons are born to fight and conquer! A true leader will never forget this." - Narrator of Klingon introduction in Birth of the Federation.

The Klingon Empire (Klingonese: tlhIngan wo') is an interstellar political entity in the Beta Quadrant, headed by the Klingon Chancellor and High Council, based in the Great Hall in the First City on planet Qo'noS.

The empire was begun by Kahless the Unforgettable, who first united the Klingon people. Fifteen hundred years later, Kahless, son of Kahless, a clone of the original Kahless, was installed as Emperor of the Klingon Empire, the first in three centuries, though given no political power. (TNG episode: "Rightful Heir")

Non-Klingon subjects of the Klingon Empire are called "jeghpu'wI'", a status greater than slave, but less than citizen. (TNG novel: Diplomatic Implausibility)

The Klingon Empire was first formed around the end of the first millennium, this Empire fell to the Hur'q, as did the ancient Karsid Empire. (TOS novel: Ishmael) The Klingons soon recovered and began to build their Empire. By the 22nd century the Klingons were a major power in the Beta Quadrant. (DS9 episode: "The Sword of Kahless"; ENT episode: "Broken Bow")

Throughout much of the 23rd century the Klingons were engaged with hostilities with the United Federation of Planets which finally came to an end in 2293 with the signing of the Khitomer Accords. (TOS episode: "Errand of Mercy"; TOS movie: The Undiscovered Country)

By the mid-24th century the Klingons and Federation were close and devoted allies, and fought side by side - along with the Romulans - to defend the Alpha and Beta Quadrants from the Dominion in the Dominion War of the 2370s. (DS9 episodes: "By Inferno's Light", "What You Leave Behind", et al.)

Officially, the Klingon Empire is a feudal monarchy, with power residing in the Emperor, who is traditionally a descendant of Kahless. In reality, however, the power lies with the Klingon High Council, which is led by the Chancellor. According to one account, the position of emperor was abandoned (but not officially abolished) in the mid-21st century, but was revived in 2369 when a group of clerics created a clone of Kahless, who was accepted as the new Emperor, albeit only as a figurehead. However, the empire has, in fact, installed emperors as recently as the late 23rd century (including Kahless IV), who wielded some significant political authority on behalf of the government. By the mid-to-late 24th century, though, many of these same emperors would be publicly disavowed by certain chancellors, including Gowron, prior to the ascension of the Kahless-clone. (TNG episode: "Rightful Heir"; TOS comic: "Errand of War"; TOS comic: "The Trial of James T. Kirk"; TOS comic: "Romulans: Schism")

The true power of the Empire is held by the Chancellor and the High Council, which consists of 24 members representing various Great Houses (essentially, the nobility).

Women are not normally permitted to hold seats on the High Council. (TNG episode: "Redemption, Part I") However, Azetbur, the daughter of Chancellor Gorkon, was permitted to succeed him as Chancellor in 2293. It is believed this was permitted because she was made the head of her house, due the unusual circumstances surrounding her father's death. (Star Trek VI: The Undiscovered Country)

Various factions almost constantly challenge the leadership of the Empire, and so over time the Klingons have developed a strict and rigorous Rite of Succession to determine their leader. According to tradition, one may challenge the leader on the grounds of cowardice or dishonorable conduct and fight in single combat. Should the challenger slay the incumbent, he assumes the role as the new leader. (DS9 episode: "Tacking Into the Wind")

Because of the Klingon propensity for violence, some shrewd Klingon chancellors have redirected hostilities outward, when they would otherwise cause a civil war. In the 2150s, the Klingon chancellor instructed Duras to recapture Jonathan Archer after the latter escaped imprisonment on Rura Penthe. In this way, the chancellor focused the blame for certain internal problems on an external cause. (ENT: "The Expanse") Likewise, Gowron focused his soldiers' energies on invading first the Cardassian Union and later the Federation in order to avoid internal conflicts at home. (DS9 episodes: "The Way of the Warrior", "Apocalypse Rising")

Aside from challenges to the primary leadership of the Empire, there is also frequent feuding between the various Great Houses. Most often, the challenge is made on the floor of the High Council and resolved on the battlefield. However, on occasion, some "dishonorable" House leaders have chosen to make more insidious attacks by undermining the standing of their enemies; D'Ghor underhandedly attacked the House of Kozak in this way in the early 2370s. (DS9 episode: "The House of Quark")

Part of the Empire's alliance with the Federation, under Article 749.3, there was to be a free exchange of any and all information pertaining to the rescue and safety of stranded refugees. (TNG novel: War Drums)

The Klingon Empire is a warrior culture and embraces these attributes. The role of expansion and defense are both prided and conducted by the Klingon Defense Force. While the agency controls the starships that bring new worlds into the empire, it is the Planetary Regiments that conquer the world itself and secure it in the name of the Empire. The upper levels of the Defense Force consists of the Klingon High Command.

There appears to be an elite academy group consisting of young warriors known as the First Cadre which seems as the Empire's equivalent of Starfleets Omega Squad.

A prestigious award known as the Star of Kahless is awarded to those inducted into the Order of Kahless. (DS9 episode: "When It Rains...")

Being a warrior culture, the Klingons developed several combat tactics to use in battle one of which is the N'yengoran strategy which details ways of attacking fortified ground based enemy positions. (DS9 episode: Blood Oath) One such military tactic is the BIng maneuver. It was also known that much of the Klingon Empire's scientific breakthroughs were made by the subjugation of advanced technological societies. (TOS novel: Memory Prime)

The flagship of the Klingon Defense Force is the IKS Sword of Kahless.

Klingon law is quite brutal towards offenders, with sentences including imprisonment on the ice mines of Rura Penthe or even death. During the trial, the Judicial Charter of Koloth allows the Advocate to attack the charges made against them at any point during the tribunal. (ENT: Judgment).

Klingon colonies tend to be equipped with special structures that appeal to the Klingon race such as the Hunting Grounds and Hall of Learning. (TNG video game: Birth of the Federation)

Religion plays an important part in the Klingon Empire, and many are devout worshipers of Kahless, or the Kuvah'magh. Many Klingons also celebrate religious holidays, including the Day of Honor and the Kot'baval festival.

In the Klingon Empire, the government is run by Klingons and every citizen is a Klingon. Other races do exist within the empire, whom are known as the Jeghpu'wi. The word means "conquered people" and their worlds are subject to Klingon rule. The Jeghpu'wi for the most part neither socialize or intermingle with the Klingons.

Slavery used to be practiced in the Klingon Empire, with the slaves ("kuve") originating from conquered races or prisoners of war, but slavery has all but virtually ceased to exist in the empire. The social status of a Jeghpu'wi is that of a "subject", less than a citizen but higher than a slave.[1]

The Klingon Empire borders several states: the United Federation of Planets, the Romulan Star Empire, the Imperial Romulan State, the Tholian Assembly, and the Gorn Hegemony.

The immediate neighbors of the Empire was the region of space where the members of the United Federation of Planets was located. The Klingon Neutral Zone would be formed as a result of the Organian Peace Treaty, which defined a border between the two powers. The Alshanai Rift was one region of space that bordered the two states.

The Romulan Star Empire would also be an immediate neighbor of the Empire.

The Klingon Empire also shared a border with the Orion Syndicate in the mid-22nd century, known as the Borderland. It was home to rogues of both powers and was noted as being unpredictable and dangerous.

Numerous other neighbors of the Empire included the Sha'Kurian Ducal Territories. The Tholian Assembly was another neighbor of the Empire with the Taurus Reach, known to the Klingons as the Gonmog Sector, in between them and the Federation.

In an alternate timeline, Captain James T. Kirk was unable to prevent the assassination of Federation President Ra-ghoratreii at the Khitomer Conference in 2293, leading to war between the Federation and the Klingon Empire. The Klingons eventually emerged victorious and controlled most of the Federation's former territory by the 2360s. (TNG - Myriad Universes comic: "Do Not Close Your Eyes")

In another alternate timeline created when the USS Enterprise-C was accidentally sent through a temporal rift from 2344 to 2366, the Klingon Empire had been at war with the Federation for almost 20 years as the Enterprise-C's disappearance resulted in the destruction of the Klingon colony Narendra III. By 2366, 40 billion people had died in the war and, although it was not generally known, Starfleet believed that surrender would be inevitable within six months. (TNG episode: "Yesterday's Enterprise")

In another alternate timeline in which Captain Benjamin Sisko became trapped in a subspace field in 2372, the Klingon Empire took control of Deep Space 9 in 2373. Federation-Klingon relations were still tense in 2422. (DS9 episode: "The Visitor")

In a timeline were Surak didn't reform the Vulcans, the Klingon Empire expanded differently because the Romulans were absent. By the 2290s, the Empire stretched from the Typhon Expanse to the Delta Triangle and was hemmed by obstacles in several directions, including core- and rimward. The Interstellar Union occupied a substantial portion of the border. Other bordering states included the Gorn Hegemony, the Holy Order of the Kinshaya, Metron Consortium, Guidon Space Pontificate, Taurhai Unity and the Kshatryan Regime.

In the year 2293, Chancellor Korrd authorized an invasion of the Interstellar Guard. (ST - Myriad Universes novel: The Tears of Eridanus)

In an alternate reality, the Klingon Empire had conquered most of the Alpha and Beta Quadrants by 2380. Once the conquest of Bajor was complete, it planned to invade the Gamma Quadrant through the Bajoran wormhole. (TNG novel: Q & A) 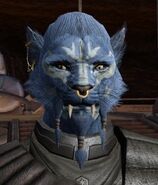 A Ferasan officer in the 25th century KDF. 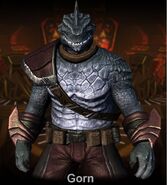 Gorn of the 25th century KDF.

Lethean of the 25th century KDF.

Nausicaan of the 25th century KDF.