Kodrash was a male Klingon captain serving in the Klingon Defense Force in the 23rd century. He was the commanding officer of the IKS Kandar.

In 2273, the Kandar was stranded at impulse speeds within the Federation-Klingon Neutral Zone in the Beta Quadrant after depleting its dilithium reserves. Kodrash sent a landing party down to Forma VI to locate replacement crystals in a depleted mine, but not even fragments were found.

When the USS Enterprise was detected traveling in the star system at impulse, Kodrash was suspicious. The Enterprise then jumped to warp three prior to its orbital approach. Kodrash moved the Kandar out of orbit temporarily and ordered his surface party to spy on the Starfleet group. First officer Koth later took the Starfleet officers hostage. Kodrash then contacted the Enterprise and gave Montgomery Scott one hour to trade the hostages for dilithium. When Scott countered that he'd destroy the Kandar, Kodrash replied that destruction was preferable to their failing to return on time to the Klingon Empire.

Pavel Chekov beamed down with a team of security officers who were able to capture the Klingon landing party. After James T. Kirk returned from the surface, he told Kodrash that his men were being returned to him for discipline and that they needed a lesson in military courtesy. Kirk said they would also be bringing dilithium. Kodrash's suspicion and pride prompted him to fire disruptors at the travel pod. Rather than triggering a hidden bomb, the disruptors killed Koth, Krax, and three other Klingons. Kodrash was forced to take the Kandar homeward at impulse speeds. (TOS comic: "Dilithium Dilemma") 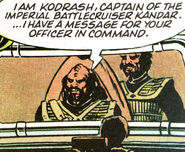 Kodrash on his bridge
Add a photo to this gallery
Retrieved from "https://memory-beta.fandom.com/wiki/Kodrash?oldid=639528"
Community content is available under CC-BY-SA unless otherwise noted.